The General Court (GC) recently handed down a judgment in Case T-601/17 Rubik's Brand v EUIPO, deciding – again – on whether the below three-dimensional mark representing the shape of the Rubik's Cube was purely functional: 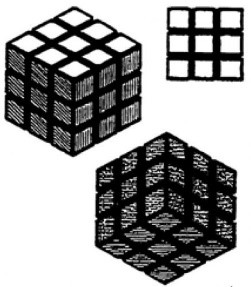 As many trade mark enthusiasts will know, this is the second time the mark in question made an appearance before the GC. For those interested, additional information on the Rubik's Cube saga can be found here. Today's post examines the present judgment and takes a look, more generally, at how (allegedly) functional signs fare before the GC (in the tradition of a previous piece on the fate of laudatory signs).

The saga, in short, turned on the question of whether the sign at issue was functional within the meaning of Article 7(1)(e)(ii) of Regulation 40/94. According to that provision, signs shall not be registered if they consist exclusively of the shape of goods which is necessary to obtain a technical result (NB: the current version of Article 7(1)(e)(ii) EUTMR includes the additional wording "…shape, or another characteristic").

The GC's first decision regarding the Rubik's Cube (of 25 November 2014) was later annulled by the CJEU (Case C-30/15 P, reported by the IPKat here). The CJEU held that the GC erred by taking the view "that for the purpose of examining the functionality of the essential characteristics of the sign concerned, […] the shape at issue, as represented graphically, should have been taken as a basis, without necessarily having to take into consideration any additional circumstances". The functionality of the sign, said the CJEU, should have been assessed in the light of the technical function of the actual goods concerned (i.e. a three-dimensional 'Rubik’s Cube'-type puzzle).

Taking those principles into account, the Board of Appeal (this time around) declared the mark at issue invalid. By the judgment at issue (of 24 October 2019), the GC dismissed the appeal filed by the trade mark owner. The Court's reasoning can be summarised as follows:

Making reference to Lego (Case C‑48/09 P) and Philips (Case C‑299/99), the GC found that the arguments put forward by the trade mark owner could not call these findings into question. It was deemed irrelevant that…

Without a doubt, some will criticise the present decision for applying too strict a test in assessing the functionality of the sign at issue. Others, however, may praise the GC for stringently applying the principles established by the CJEU. At any rate, it is difficult to deny that (allegedly) functional signs currently face difficult times before the GC if the below non-exhaustive list of judgments is anything to go by:

Sharing on Social Media? Use the link below...
Perm-A-Link: https://www.marques.org/blogs/class46?XID=BHA4809