In Case C-30/15 P, Advocate General (AG) Szpunar, has recently handed down his Opinion arguing that the 3-D mark 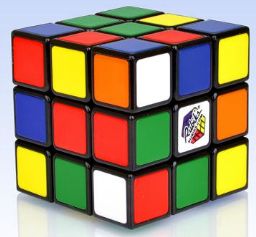 representing the shape of the Rubik's Cube is not eligible for trade mark protection. The AG's Opinion raises some interesting points concerning the type of information that may be taken into account when considering the functionality of a trade mark. 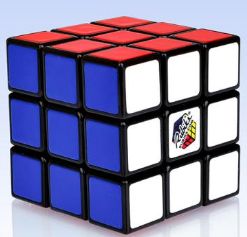 So what is this Case about? The Rubik's Cube hardly requires any introduction. For those readers who have miraculously managed to escape this intriguing toy (or frustrating, as some would argue), the Rubik's Cube can be described as a brain-teaser, in which the movable elements can be rotated with the goal of allocating them so that each of the cube's sides only has one colour (see picture on the left). The toy was invented in the 1970s and subsequently protected by a patent.

In 1996, the British company Seven Towns successfully applied for the shape of the Rubik's Cube, depicted below, as a three-dimensional EU trade mark in respect of "three-dimensional puzzles": 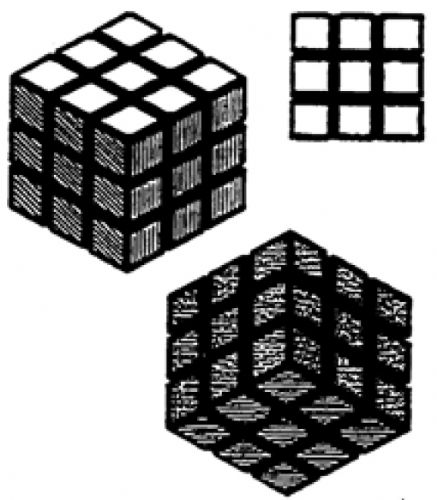 Several years later, the German toy manufacturer Simba Toys applied to have the 3-D mark cancelled, particularly on the grounds that it contained a technical solution within the meaning of Article 7(1)(e)(ii) EU Trade Mark Regulation (EUTMR). Under this provision, signs are not eligible for trade mark protection, in particular, if they are purely functional, that is if they exist exclusively of the shape of goods which is necessary to obtain a technical result.

Both the Cancellation Division and the Board of Appeal of the EUIPO rejected the cancellation request, claiming that the above requirements were not met. The General Court (GC) confirmed this finding. In the Court's view, the essential characteristics of the contested sign (i.e., the shape of the cube as such and the grid structure) did not imply any technical solution. The Court argued that no consideration should be given to the well-known rotating capability of the Rubik's Cube puzzle. In other words, the functionality should not 'illegitimately' be read back into the graphical representation of the mark. Rather, the assessment of the mark's alleged functionality had to be based only on the examination of the representation of the mark as filed. Consequently, the GC dismissed Simba's action.

But following the AG's Opinion, Simba might just be back in the game. AG Szpunar stated that the GC's reasoning was not in line with the public interest underlying Article 7(1)(e)(ii) EUTMR, which lies in keeping within the public domain the essential characteristics of particular goods which are reflected in their shape. Restricting the assessment of the functionality of a trade mark to its graphic representation might undermine this public interest, said the AG. Therefore, when analysing the functional elements of a shape, the competent authority also had to take account of other relevant information.

On that point, AG Szpunar mentioned that the CJEU has already rejected the GC's theory that the analysis of the functionality of a shape ought to be restricted to the graphic representation of the mark: As readers of this Blog may recall, the GC held in Pi-Design that the sign depicted on the left, representing the handle of a knife, was eligible for trade mark protection in respect of, among other things, "knives" (see Case T-416/10, reported here). According to the GC, the graphic representation of the sign by itself did not make it possible to infer any technical function performed by the 'black dots'. In particular, based purely on the graphic representation, the dots could not be said to constitute special dents in the handle of a knife. With this reasoning, the GC rejected the contrasting approach of the EUIPO, which had concluded that the black dots/dents were actually necessary to obtain a non-skid effect of the knife handles (based on information taken from existing patents and the goods actually marketed by the trade mark owner). However, the CJEU made clear that it was the GC's assessment which was flawed (see Joined Cases C-337/12 P to

C-340/12 P, reported by the IPKat here). More specifically, the CJEU confirmed that the EUIPO did not necessarily err in law by also taking into account the representations of the goods actually marketed, which showed use of the mark concerned. In the AG's view, the same principle had to apply in the present Case.

In support of his argument, the AG also referred to Lego Juris by way of analogy (see Case C-48/09). It almost

goes without saying that this particular decision of the CJEU concerned the trade mark representing the shape of a red toy brick (depicted on the left). AG Szpunar contended that, leaving aside any knowledge of the actual goods, it would also have been difficult to infer what function was performed by the shape of the brick. Yet, the CJEU held the toy brick to be purely functional and, in fact, established that the analysis of a sign for the purposes of Article 7(1)(e)(ii) EUTMR had to be based on "a detailed examination in which material relevant to the assessment is taken into account, such as surveys or expert opinions, or data relating to intellectual property rights conferred previously in respect of the goods concerned".

In view of the above case-law, AG Szpunar argued that the GC construed the scope of analysis too narrowly in the Case at hand by restricting the assessment to the depiction of the mark applied for. This approach, according to the AG, would impose an excessively high standard on the assessment of functional shapes which would make it possible to circumvent the prohibition on monopolisation contained in Article 7(1)(e)(ii) EUTMR. To prevent such circumvention, the goods which were actually marketed (here:  the Rubik's Cube) had to be considered in the present Case as well.

Going one step further, the AG considered that the CJEU would be in a position to give final judgment. AG Szpunar held that the functionality of the contested mark was ultimately confirmed by the well-known features of the represented Rubik's Cube puzzle, in which the movable elements, arranged in vertical and horizontal columns, could be rotated. The shape of the cube and the grid structure dividing the vertical and horizontal columns of evenly spaced elements, were necessary to perform that technical function inherent in the goods concerned. Beyond these functional characteristics, the contested mark contained no arbitrary or decorative characteristics. Consequently, the mark was purely functional.

It will be very interesting indeed to see how this Case plays out and whether or not the CJEU will follow the AG's Opinion. In any event, the CJEU will have an opportunity to (hopefully) clarify the type of information that may or may not be taken into account when considering the functionality of a trade mark under Article 7(1)(e)(ii) EUTMR.

Sharing on Social Media? Use the link below...
Perm-A-Link: https://www.marques.org/blogs/class46?XID=BHA4381