The Greek Police has reported (in Greek) that, in the context of a raid at the premises (warehouse) of a transport company in Votanikos, Athens, some 19.000 counterfeit items were seized. The items were mainly apparael, footwear and accessories. 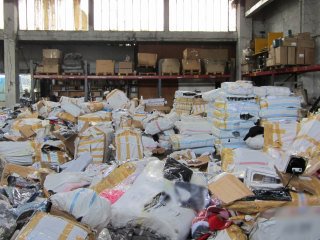 The items were reportedly loaded and ready to go, when the raid took place. 1 person was arrested and charged with forgery (a useful anti-counterfeiting tool in Greece), market regulation violation, as well as trade mark and unfair competition criminal offenses.

Police authorities also published a video of the premises, including the destruction process.

*On this dark day, our thoughts are with the people in Belgium.

Sharing on Social Media? Use the link below...
Perm-A-Link: https://www.marques.org/blogs/class46?XID=BHA4328