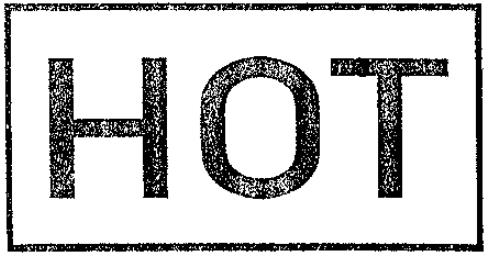 v OHIM and Effect Management & Holding GmbH, deciding on whether the figurative sign 'HOT' on the right could be protected, in particular, for cosmetics and sanitary products. The decision deals, among other things, with the question of how to distinguish (non-registrable) laudatory terms which exclusively describe certain characteristics of the relevant products, on the one hand, from sufficiently ambiguous (and, thus, registrable) words on the other hand (see, on this point, OHIM Examination Guidelines, Part B, Section 4, p. 40).

Initially, OHIM had granted protection to the above International Registration 'HOT' naming the EU, filed by Effect Management & Holding GmbH. Subsequently, however, the European part of the mark was challenged by Australian Gold LLC based on Article 52(1)(a) of the CTM Regulation (CTMR), claiming that the mark was purely descriptive and lacked distinctive character. As regards these issues, the GC came to the following conclusion:

The mark was held to be purely descriptive of, in particular, "massage oils, gels" in Class 3 and "lubricant for pharmaceutical use" in Class 5 within the meaning of Article 7(1)(c) CTMR, because these goods were intended to be applied to the skin "through more or less repetitive motions, which create the sensation of 'heat'". On the same basis, the mark was also considered descriptive of "perfumes, essential oils, cosmetics", because "massage oils, gels" were mere examples of that broader category of goods, which was indicated by the word "including" within the list of goods.

With regard to "washing and bleaching preparations; soaps" in Class 3 and "food supplements for medicinal purposes" in Class 5, however, the GC found that the term 'hot' did not indicate the high temperature of these goods themselves, nor the adequate temperature for their use. Positive connotations of the word 'hot', such as 'attractive' or 'sexy', were too vague to create a direct link with these goods.  More interestingly, the GC considered the mark also sufficiently distinctive under Article 7(1)(b) CTMR in respect of these goods. According to the Court, Austrian Gold had not proven that the word 'hot' was exclusively a laudatory term, since it also portrayed meanings, such as 'spicy', which lacked a laudatory character.

The decision is particularly interesting for three reasons:

First, by finding, in essence, that a word with a laudatory connotation can be registered as a trade mark if not all of its meanings are exclusively laudatory, the GC has arguably interpreted the CJEU's guidelines in Vorsprung durch Technik very generously (see Case C-398/08 P, reported here). In that decision, the CJEU held that a mark is likely to have distinctive character if it can be considered to "have a number of meanings, or constitute a play on words or be perceived as imaginative, surprising and unexpected and, in that way, be easily remembered" (emphasis added). That being said, the GC's interpretation appears, at least, to create a tension with the generally accepted doctrine established by the CJEU in Doublemint, namely that it suffices for a refusal of a trade mark if at least one of its possible meanings is descriptive in relation to the relevant goods and services (see Case C-191/01).

Second, as readers of Class 46 may recall, the German Federal Court of Justice (FCJ) held in 2014 that the concerned figurative mark 'HOT' was devoid of any distinctiveness in respect of all the covered goods (reported here). Contrary to the GC, the German FCJ concluded (loosely translated into English):

If a word (here: 'HOT') has various meanings (here: 'heated' as well as 'spicy or piquant' regarding taste and in a figurative sense 'sexy, terrific or great'), which are all descriptive in relation to the goods for which it is registered (here: goods including cleaning preparations, cosmetics, food supplements, printing products and clothing), the measure of interpretation that is required on the part of the relevant public merely due to these different meanings is not enough to confer distinctiveness on that word.

Expressly referring to the judgment of the German FCJ, the GC noted that it was not bound by previous decisions adopted in any Member State.

Third, in the view of this blogger, the GC's decision does not necessarily make it easier for trade mark practitioners to predict whether a more or less laudatory term will pass the relevant test of distinctiveness. A brief look at the Court's recent 'track record', reveals an – unfortunately, but fittingly - ambiguous result:

Sharing on Social Media? Use the link below...
Perm-A-Link: https://www.marques.org/blogs/class46?XID=BHA4145