There was a whole session devoted to designs on Wednesday afternoon at the MARQUES Annual Conference.

Michael Maier of COTY Germany started off by explaining his company’s approach to IP protection, including both trade marks and designs. He said he always requests the marketing teams to provide examples of the bottle designs, both for a design search and to consider protection for the design. 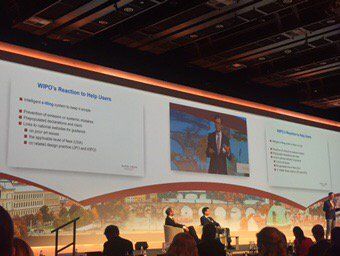 When it comes to getting protection, there are often two options, he said: trade mark or registered design? EU case law is quite strict on trade mark protection for shapes, and bottles will probably have to be distinctive to be registrable. But designs can be obtained very easily, are unexamined and are very cost-effective compared to trade marks. Broad protection can be obtained through RCDs or the Hague System.

Oliver Nilgen of Meissner Bolte gave a lawyer’s perspective, highlighting the novelty requirement in design law. The protection strategy must be defined before any disclosure, he said, and he discussed national differences regarding issues such as novelty examination, filing multiple designs, three-dimensional designs and descriptions. In the light of the differences, is it wise to file one design application covering major markets such as the EU, United States, Japan and Korea, asked Oliver.

Addressing that question, Grégoire Bisson, Director of The Hague Registry at WIPO, said: “Unlike the Madrid System, The Hague System is a true one-stop shop.” It covers 66 jurisdictions in total, and the accession of the US, Japan and Korea in 2014-15 “revolutionised” the System, he added.

Grégoire highlighted the tools available to help with applications, saying: “Hague is simple … but design law is not”. A particular challenge is the refusals received from the Japanese, Korean and US offices. Offices cannot invoke national requirements on formal aspects such as colour, photographs/CAD drawings or surface shading to refuse applications: “It’s your liberty under the Hague System to use these or not.” Instead, refusals often relate to designs being insufficient or unclear, due to lack of or inadequate surface shading, lack of a description to clarify the scope of protection, insufficient views or lack of consistency among the views. “What you do from a formal point of view may affect substance,” said Grégoire.

He also addressed issues specific to certain jurisdictions, such as unity of design in the United States, and the need to specify the principal design and be specific in the product indication in Japan and Korea. By paying attention to these issues, you can be successful but it pays to be prepared, said Grégoire: “You need to do a bit more thinking before filing your application.”