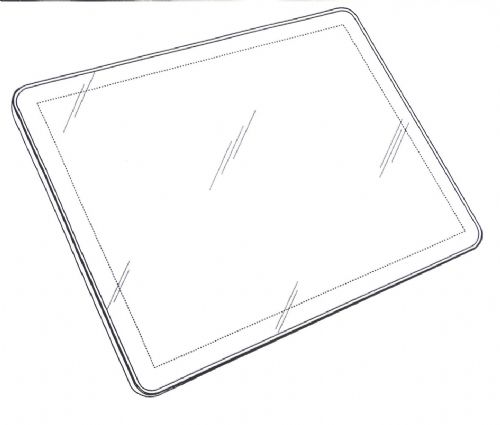 We previously reported on Apple's unsuccessful application for an interlocutory injunction in the US late last year.  Judgment in the CAFC appeal from the District Court's refusal (Apple, Inc. v. Samsung Elecs. Co., U.S. Court of Appeals for the Federal Circuit (Bryson, Prost, O'Malley)) has just been published, and it looks promising for Apple, though without the immediate payoff they sought.
The CAFC upheld the District Court's refusal of relief on the iPhone designs (US design patents US D618,677 and D593,087) - but strengthened Apple's hand on validity in relation to the '087 patent.  The effect of that leaves both iPhone designs looking probably valid and infringed at this stage of proceedings.
The more substantial issue arose in relation to validity of the iPad design US D504,889 (equivalent to RCD 181607-0001).  This the District Court had held to be likely invalid over two references in combination (the "1994 Fidler Tablet" and the "Hewlett-Packard Compaq Tablet TC1000").
The CAFC held that they had wrongly assessed obviousness, and that the iPad design was likely valid over these citations.  The majority referred the case back to the District Court to determine whether to grant an interlocutory injunction.  O'Malley, dissenting on this point, would have granted an interlocutory injunction there and then, as there was a good case on validity, infringement and irreparable harm.
This appeal, like the successful Crocs appeal we reported last year, seems to indicate a new, more favourable approach to validity of designs following the Egyptian Goddess case.  According to the Court, to assess obviousness of a design patent, there is a two stage enquiry:
In this case, "Based on the differences between the Fidler tablet and the D’889 design, we hold that the Fidler tablet does not give the same visual impression as the D’889 patent, and therefore the district court erred in looking to Fidler as the primary reference against the D’889 patent." But in any event, "Even assuming that Fidler qualified as a primary reference, the TC1000 secondary reference could not bridge the gap between Fidler and the D’889 design."
Finally, an interesting note concerning "design dilution" as irreparable damage suitable to found an interlocutory injunction.  Apple complained that the District Court had rejected this out of hand, but the CAFC disagreed: "Contrary to Apple’s contention, however, that observation does not reflect a wholesale rejection of design dilution as a theory of irreparable harm, which we agree would have been improper. ... The district court’s opinion ... makes clear that it did not categorically reject Apple’s “design erosion” and “brand dilution” theories, but instead rejected those theories for lack of evidence at this stage of the proceedings."  It therefore seems clear that design dilution could, with suitable evidence, be the basis of an interlocutory injunction even absent economic damage.