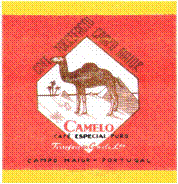 A few months ago the well-known Dutch columnist Henk Hofland wrote a wonderful essay on his long career as a smoker in the Dutch quality paper NRC Handelsblad, in which he praised the Lord for several cigarette trade marks and their packaging. Very famous for example in post-2nd-world-war-Netherlands were Chiep Whip (Virginia tobacco) and Alaska (the first menthol). When I started smoking myself (lucky me I quit eight years ago!) I had the same enthusiasm for the olde trade marks. Some of them were at that time still available in the Netherlands, for example Three Castles, Miss Blanche, Golden Fiction and - very famous and still going steady - in the Netherlands, Belinda, the woman's cigarette!

My addiction left my body, but the enthusiasm remained, also for that figurative cigarette trade mark to which the Court of First Instance today awarded no full protection in an opposition against a similar trade mark, registered not for cigarattes, but for roasted coffee: the Camel trade mark with the camel that is clearly a dromedary, and the pyramid and palms in the background, which has been registered with slight variations throughout the world. In 1999 (if I am correct) US tobacco company Reynolds transferred the Camel trade marks relevant for non-US-business to Japan Tobacco Int., including among others the trade mark rights in Spain. With these trade mark rights Japan Tobacco opposed the Community trade mark application of the Portuguese company Torreaccao Camelo Lda, dated March 15, 2000. The Opposition Division considered the Camel trade mark as a famous trade mark as defined in art. 6bis of the Paris Convention and upheld the opposition on the basis of art. 8(5) CTMR (taking unfair advantage of the famous Camel trade mark for non-similar goods), which consideration was not agreed upon by the Board of Appeal. However the Board ruled that art. 8(1)(b) CTMR (coffee and tobacco are similar goods; there is a risk of confusion).

Japan Tobacco disagreed and attacked the negative art. 8(5) CTMR decision of the Board of Appeal at the Court of First Instance. The Court of First Instance dismissed the appeal: the Court agrees with the Board of Appeal that the distinctive element of the Camel trade mark is the verbal element 'Camel'; the dromedary which is not a camel, the palms and the pyramids are only banal elements because they are a common property used for products with an oriental origin. Thus the Camel trade mark has a weak distinctive character. To the Court it is not evident that there is any dilution. The Court finds that the elements of art. 8(5) CTMR should be proven accurately. You can read the full judgment here.

Sharing on Social Media? Use the link below...
Perm-A-Link: https://www.marques.org/blogs/class46?XID=BHA7