The WIPO arbitration panel has ruled that the domain names "schlaemmerblog.tv" and "schlaemmerhatgolf.tv" had been used and registered in bad faith and ordered that the domain be transferred to its legitimate owner, Hans Peter (Hape) Kerkeling. The Complainant is Hape Kerkeling (right), a famous and award-winning German comedian, who invented the comic character "Horst Schlämmer" (below left). As Schlämmer the Complainant also published the music singles "Schätzelein" and "Gisela". The Respondent is Dr. Matthias Moench of the Czech Republic.

The Complainant entered into an advertising contract with Volkswagen and a story was developed about fictitious character Schlämmer, a journalist, taking driving lessons. To promote the campaign, the Complainant created the blogs "schlaemmerblog.tv" and "schlaemmerhatgolf.tv". The highly successful campaign was active between January and September 2007; the disputed domain names were subsequently cancelled. The Respondent 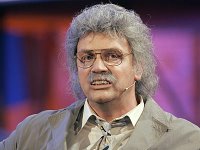 registered both domain names in January 2008, and has since used them to show pornographic content and links to sex services. In February 2008, the competent court in Cologne, Germany, issued a preliminary injunction against the Respondent to cease the use of the disputed domain names for entertainment services. The Respondent did not comply with this court order.

Tobias Zuberbühler, acting as sole panelist, found that the disputed domain names were confusingly similar to the Complainant’s German trade mark in HORST SCHLÄMMER, as required by paragraph 4(a)(i) of the Policy:

“[A] non-distinctive addition of the generic terms “blog” and “hat Golf” (“has a Golf car”), respectively, to the distinctive part of the Complainant’s trademark(SCHLÄMMER) does not sufficiently differentiate the domain names from the Complainant’s mark (cf. e.g. Accor v. Domains by Proxy, Inc./Ostrid Company, WIPO Case No. D2008-0707,

Even though, the domains had been cancelled, the sole Panelist found that the Respondent’s conduct constituted bad faith registration and use, thus fulfilling paragraph 4(a)(iii) of the Policy

"… it is apparent that the Respondent intentionally intends to attract consumers to its website for commercial gain by creating confusion about the source and sponsorship of its website.

For the above reasons and in accordance with paragraphs 4(i) of the Policy and 15 of the Rules, the Panelist orderered that the domain names “schlaemmerblog.tv” and “schlaemmerhatgolf.tv” had to be transferred to the Complainant.

Sharing on Social Media? Use the link below...
Perm-A-Link: https://www.marques.org/blogs/class46?XID=BHA609