The MARQUES Month series of online events began this week with three webinars. Next week features sessions on using technology to track counterfeiters and on corporate counsel and the Madrid System.

All the sessions are recorded and are available to watch on the MARQUES Month portal if you have registered.

This week began with the Opening and Welcome, in which MARQUES Chair Susie Harris highlighted some of the themes of MARQUES Month, including the impact of technology on brands and the importance of sustainability. She also discussed what MARQUES is doing to promote education and knowledge-sharing among members.

The Opening also featured Magnus Ahlgren, Head of the Legal and International Affairs Department at the Swedish IP Office. He would have been the keynote speaker at the Annual Conference, which was due to be held in Stockholm this year.

Mr Ahlgren discussed topics including the impact of COVID-19 on IP filings and IP offices, in both the short- and long- term, the implementation of new technological tools and efforts to promote IP to SMEs. The emphasis on SMEs ties in with EUIPO’s 2025 Strategic Plan, which was launched earlier this year. 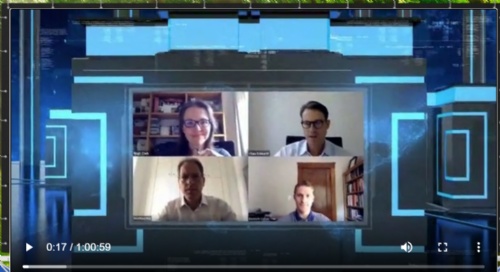 In keeping with the technology theme, the first two panel sessions of MARQUES Month both focused on Blockchain applications.

On Tuesday, a panel moderated by Claus Eckhartt of Bardehle Pagenberg Partnerschaft (Chair of the MARQUES Programming Team) sought to demystify Blockchain, and discuss its potential application to IP.

Bennett Collin, CEO of Cognate, explained in accessible terms how Blockchain works and why its public and decentralised nature guarantees trust and immutability. This makes it valuable for storing records of trade mark use, for example.

Matthieu Hug, CEO of Tilkal, added that maintaining reputation is vital for brands, and Blockchain can play a role in that by documenting supply chains, and providing evidence of CSR compliance. He provided examples of how brands including JOONE, DANONE and DAHER are using Blockchain to increase transparency and traceability.

The third speaker, Birgit Clark of Baker McKenzie, said that because “Blockchain removes the middleman” and is time-stamped, it can be used to provide evidence of conception, use and status of rights such as trade secrets, copyright and unregistered trade marks. It also has applications in licensing and smart contracts. WIPO PROOF is a notable new product that is inspired by Blockchain, but not dependent on Blockchain.

In the Q&A, the speakers addressed why Blockchain has not yet exploded, whether it has the potential to be a panacea for IP protection and concerns over its environmental impact. They also stressed that Blockchain is a tool that can be used to build solutions – not a solution in itself. 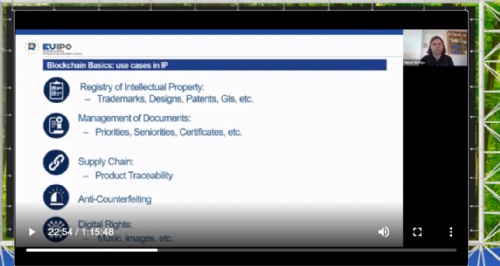 In the second panel session, two speakers from EUIPO (Miguel Ortega and Adam Stubbings) explained how the Office is developing Blockchain-based services. These include the IP Register on Blockchain, which will build on and improve the existing Trade Mark and Design View tools, which have records from more than 70 IP offices. Blockchain will provide better data validation, greater speed and full history. The project is already being implemented for the IP Office of Malta, and Estonia will be added next year as well as other offices.

The panel was moderated by Robert Guthrie of Osborne Clarke (Chair of the MARQUES European Trade Mark Law and Practice Team) and also featured Petral Herkul of DSM (Chair of the MARQUES Anti-Counterfeiting and Parallel Trade Team). Petra provided an in-house perspective on what she called the “digitalisation of IP” and on the EU Blockathon, which took place in 2018.

The next two sessions in MARQUES Month are:

If you are registered for MARQUES Month, you can join the sessions live for the full experience and to ask questions of the speakers. If you cannot join live, the recorded versions will be available shortly after broadcast.

If you have not yet registered, there is still time to do so: go to the MARQUES Month lobby for more details.

Sharing on Social Media? Use the link below...
Perm-A-Link: https://www.marques.org/blogs/class46?XID=BHA4905