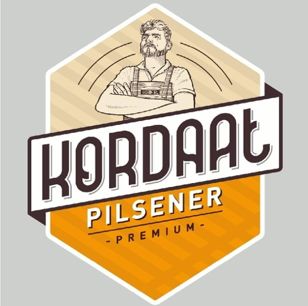 Koninklijke Grolsch N.V. (Royal Grolsch N.V., since October 2016, part of the Asahi Group) is a respected Dutch brewery, which has its roots in Groenlo, a city in the so called Achterhoek (the very eastern part of the Netherlands). Grolsch produces a variety of beers under the brand ‘Grolsch’. Grolsch made its claim to fame not only with the premium lager it produces, but also amongst others with the typical nipple top bottles it used and uses for its lager and the use of slogans like ‘Vakmanschap is meesterschap’ (literally translated: ‘Craftsmanship is Mastery’, used in commercials with a Vivaldi kind of tune, look, listen and whistle here - link: https://www.youtube.com/watch?v=e1DV2NBAInM), ‘Bierkenners vragen: Grolsch’ (‘Beer connoisseurs request: Grolsch’) and  ‘Op een dag drink je geen bier meer, maar drink je Grolsch’ (‘Some day you don’t drink beer, but you drink Grolsch’).

In 2013 Grolsch introduced a new lager: ‘Kornuit’. The marketing meme ‘Verrassend fris pils’ (‘Remarkably refreshing lager’) has become the driver for ‘Kornuit’, aimed at a younger audience, apparently (but this is unconfirmed) hipsters with or without beards. Grolsch has registered ‘Kornuit’ in the Benelux as a word mark in 2013/2014 as well as in a figurative mark in 2018 (as depicted at the left top of this post).

At the end of October 2018 the German supermarket chain Lidl - which currently operates through a subsidiary in the Netherlands 418 supermarkets - introduced a new lager in the Netherlands under the name ‘Kordaat’ for which it registered the image depicted above as a trade mark in the Benelux on 30 October 2018). The ‘Kordaat’ lager is only available in the Dutch supermarkets of Lidl, which does not sell ‘Kornuit’. The ‘Kordaat’ trade mark is used on the lager bottles, the crates and packaging of 12-packs. It is furthermore used in advertising materials and television commercials. And also in the domain ‘kordaatbier.nl’ (used to operate the website www.kordaatbier.nl).

After a c&d did not work, Grolsch started interlocutory proceedings for trade mark infringement against Lidl before the Presiding Judge of the District Court of Rotterdam (A.F.L. Geerdes), who denied Grolsch’ claims with a decision of 28 February 2019. In a decision which reads like a classic trade mark law text book the Presiding Judge finds that Lidl does and did not infringe the ‘Kornuit’ trade marks. The Presiding Judge does not judge the ‘Kornuit’ and ‘Kordaat’ trade marks by their cover, but finds and follows the applicable rules, little by little, applying the rules to the facts, making references to relevant case law and justifying its outcome.

Grolsch defends that there is an auditive as a well as a visual similarity between ‘Kornuit’ and ‘Kordaat’, because both trade marks start with ‘kor’, end with a ‘t’, consist of two syllables and the different letters consist of a consonant followed by two vowels. Lidl defends, referring to CJEU 12 January 2006, case C-361/04 P (Picasso/Picaro) and EGC 26 April 2018, case T-554/14 (Messi/Massi) that the conceptual difference between ‘Kordaat’ en ‘Kornuit’ outweighs the possible auditive and visual similarities. ‘Kornuit’ refers to ‘friend’ or ‘pal’, whilst ‘kordaat’ refers to ‘resolute’, according to Lidl.

Picasso/Picaro is relevant, because in that case the CJEU decided that if at least one of the two involved trade marks/signs has a clear and fixed meaning for the relevant public, which can thus immediately be understood by that public, conceptual differences may outweigh the visual and auditive similarities. The Presiding Judge however finds that a conclusion cannot be drawn with regard to the conceptual difference, nothwithstanding that Lidl did not file evidence (for example with a market survey) for its denial that the very large majority of the public at large knows the meaning of both words, referring to a 2013 investigation by the ‘Centrum voor Leesonderzoek’ (Center for Readingresearch. According to this investigation apparently 95% of the Dutch recognize the word ‘kornuit’, and 96% the word ‘kordaat’. This was disputed by Grolsch. That the words are recognized as Dutch words, doesn’t mean that the public knows what the words mean. According to Grolsch the word ‘kornuit’ is not used (anymore) in daily language. The majority of the Dutch consumers does not know its meaning. Apparently ‘kornuit’ is recorded as one the thousand forgotten words in Van Dale’s (the most reknowned dictionary series in the Netherlands) ‘vergeetwoordenboek’ (dictionary of forgotten words), whilst if one googles ‘kornuit’ practically no search results appear in which ‘kornuit’ is used in a descriptive way. Also the word ‘kordaat’ is according to Grolsch not a word used a lot in in daily language. The Presiding Judge therefore follows Grolsch with regard to this issue, so that Lidl cannot rely on the conceptual ‘weigh out’ ruling as laid down in Picasso/Picaro.

With regard to the visual similarity there is first of all a discussion between the parties to be decided as to which trade marks should be compared. Only the figurative trade marks for ‘Kornuit’ and ‘Kordaat’ as Lidl defends, because in general both Lidl and Grolsch use Kordaat respectively Kornuit in connection with the design of the product (which leads Lidl to the conclusion that there isn’t a visual similarity at all)? Or should - as Grolsch defends - not only the figurative trade marks be compared on a visual level, but also the word ‘kordaat’ with the registered word and figurative mark ‘Kornuit’?

With regard to the figurative trade marks Kornuit and Kordaat the Presiding Judge finds - summing up all the differences - that these marks - appreciated globally - are not similar.

Thus the Presiding Judge concludes that there is only a low degree of similarity on a visual and auditive level and accordingly establishes that a risk of confusion does not exist. According to the Presiding Judge the relevant public shall neither confuse the word and figurative trade mark Kordaat with the word and figurative trademark Kornuit, nor make a mistake as to the origin of the producs and think that Kordaat lager and Kornuit lager are from the same undertaking or economically connected undertakings. The fact that the products are identical and that Kornuit is distinctive do not make a difference according to the Presiding Judge. Therefore for the Presiding Judge there is not a risk of confusion based trade mark infringement (article 2.20 par 1 under b BCIP).

Neither does the Presiding Judge find a dilution based infringement (article 2.20 par 1 under c BCIP). According to the Presiding Judge Grolsch should have substantiated more why the degree of similarity between the signs used by Lidl for its Kordaat lager and the word and figurative trade mark Kornuit is such that Kordaat brings to mind Kornuit at the average consumer. The Presiding Judge takes into consideration that media reports in which a link is made between Kordaat and Kornuit are insufficient, because what counts and is relevant is the opinion of the ‘Gut Springenheide’ consumer. Also social media messages are insufficient, because it is unclear who posted these, while they can be posted after the media reported about the matter. In the interlocutory proceedings therefore the Presiding Judge was not able to establish that notwithstanding the small degree of similarity the relevant public makes a link as required. And accordingly the Presiding Judge leaves aside the due cause and dilution (unfair advantage and detriment) questions.

Last but not least the Presiding also finds that Lidl did not infringe the invoked Kornuit trade marks on the basis of article 2.20 par 1 under d BCIP, with which Grolsch attacked the use of Kordaat in the domain ‘kordaatbier.nl’. According to the Presiding Judge the use of a sign in a domain is to regarded as use for goods if the domain is connected to a website which is used in connection with the sale of goods (which Lidl does).

And so Grolsch’ claims were all denied. Grolsch can appeal the decision within four weeks after the date of the decision and/or start proceedings on the merits. In quite a few public comments the most used one why Grolsch should have won these proceedings, was that courts should focus on the identity of the first letters of the trademarks (signs) to be compared, but this case clearly shows that trade mark law is not algebra and that sacred formulas do not (always) exist. If Grolsch appeals the case will be dealt with by the Court of Appeal of The Hague. Cheers!

Sharing on Social Media? Use the link below...
Perm-A-Link: https://www.marques.org/blogs/class46?XID=BHA4725