Bas Kist of Chiever is one of the MARQUES members who has taken part in the latest series of EUIPO Stakeholder Quality Assurance Panels Project (SQAP) audits. In this interview for Class 46, he explains what is involved, how the audits work and what they can achieve 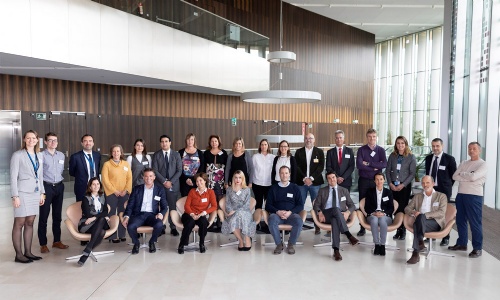 How did you become involved in the SQAP?

I received an email asking who would like to participate and responded to that. There have been four meetings (April, July and October 2018 and January 2019) and I have been to three of them. Two of the meetings were on examination decisions (absolute grounds) and two on opposition decisions (relative grounds).

Three representatives from MARQUES took part in the latest audit: myself, Roland Mallinson of Taylor Wessing and Zsófia Klauber of Danubia. Thomas Hvammen Nicholson of Protector Intellectual Property Consultants AS also represents MARQUES in the SQAP.

There were also representatives of other associations such as CITMA, ECTA, FICPI, GRUR, INTA and APRAM. Altogether there are more than 20 practitioners involved, including trade mark attorneys, attorneys-at-law and in-house counsel, and 18 took part in the most recent audit in January (see group picture above).

What happens at the meetings?

Each auditor gets given eight cases to review as the lead auditor. We take a close look at these decisions using the Office quality criteria, and then grade each decision in one of four categories: excellent, OK, containing non-critical errors or containing critical errors.

All the decisions we look at are selected randomly. We go quite deep into the cases, particularly oppositions where there is a lot to review. Opposition decisions take quite a lot of time to study – it takes about one-and-a-half days to review eight cases.

However, some of the absolute grounds decisions are very straightforward and they are either a simple refusal or acceptance so there is not much to say about them. Most of the absolute grounds cases are about distinctiveness so it is eye-opening to see the differences between people from different countries and professions – some are more strict than others. It gives you more understanding of the challenge EUIPO faces with different languages and cultures. Even as trade mark practitioners we don’t always agree!

What else do you do?

After we have gone through our eight cases, we also co-check another eight cases. Then the lead auditor presents each case to all the other auditors (who can see the files on their computers) and we discuss the cases one-by-one. After the lead auditor has presented their opinion, the co-checker says whether or not they agree. Then the EUIPO specialists explain their view: they are very open and it is useful to see how they are thinking.

If both the lead auditor and the co-checker agree that there were critical errors, then that is mentioned in the report. If there is disagreement, it is possible to have a vote of all the auditors.

The majority of decisions are OK and only a few are rated as excellent. Sometimes we do find critical errors and in some cases the Office specialists acknowledges that an error was made.

At the end of the meeting, there is a report summarising how many critical errors were found, and how to improve the quality of services. If the auditors agree there was a critical error, that will be in the report.

The meeting is also a good opportunity to meet the EUIPO representatives informally and see something of how the Office works.

What is happening in the future?

EUIPO is inviting applications to take part in the next SQAP meetings. There will be more meetings on absolute grounds and opposition cases for trade marks, and also a meeting on designs – though that will probably require fewer people because there are so few decisions.

I would definitely apply to take part again. I’ve been very impressed with the EUIPO organisation of the meetings: they are very open to listening to users. It is a nice way for the Office to look at its own work and involve users, and it generates a lot of discussion between the checkers, who bring different perspectives.

If anyone else is interested in applying, I would encourage them to do so if they have the requisite experience. It helps if you are used to reading decisions and already have a level of knowledge, as some of them can be quite complex. I would certainly recommend it!

Find out more about the SQAP on EUIPO’s dedicated page.

Sharing on Social Media? Use the link below...
Perm-A-Link: https://www.marques.org/blogs/class46?XID=BHA4712