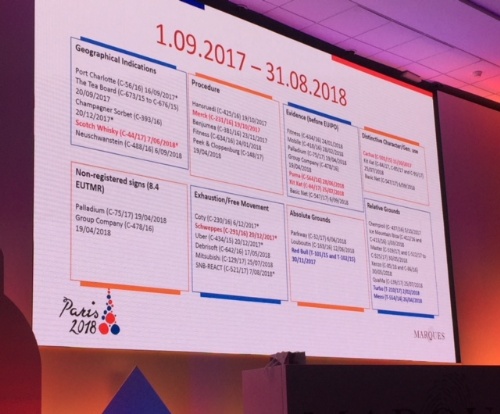 In the final session of this year's Annual Conference, Carles Prat of Baker McKenzie reviewed the past year at the CJEU and EU General Court. He noted that the number of cases and judgdments seems to be levelling off, and said: “There is a certain shift in the topics that make their way up to the General Court from the fundamentals to more specific issues.”

Regarding GIs, he said: “Everyone is learning.” A key case last year was Scotch Whisky (C-44/17) concerning whether the use of “Glen” evokes Scotch whisky. The Court said “conceptual proximity” suffices, but Carles asked whether proximity is the same or different to similarity.

On procedure, Carles focused on Merck (C-231/16) on jurisdiction in a case brought in both Germany and the UK, which ruled that the German court could decline the UK portion. Does this affect the unitary character? he asked.

Cactus (C-501/15) concerned whether the use of a logo without the word mark was an alternation of distinctive character. The Court considered it to be use in an “abbreviated form”, and only a visual and conceptual (not phonetic) comparison was necessary. 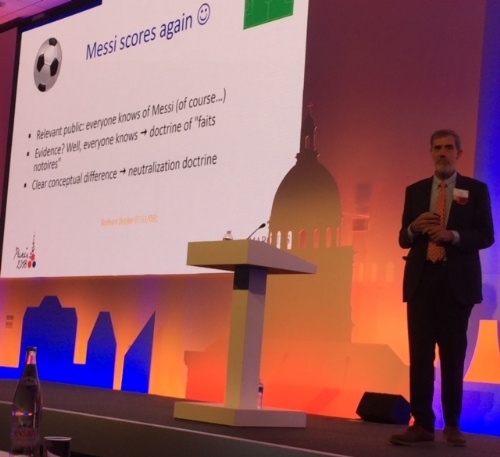 The Kit Kat case (C-84/17, C-85/17 and C-95/17) addressed evidence and in particular what is “a substantial part of the public”. Carles said the Court made a distinction between the obligation to prove acquired distinctiveness in every part of the EU, and the means of evidence needed: “We need to rethink the way we produce evidence in these cases.”

Also on evidence, Puma (C-564/16) was a case where Puma relied on three earlier EUIPO decisions. The Court focused on the principle of “sound administration” and said the Office should have invited Puma to submit supplementary evidence.

Among a number of decisions on exhaustion, Carles focused on Schweppes (C-291/16), which concerned a mark with different ownership in the UK and Spain.

Red Bull (T-101/15 and T-102/15) was a case in which MARQUES intervened. The General Court felt that Red Bull’s grey and blue application for a mark was not sufficiently clear and precise to be registered, and the case is now before the CJEU.

Two cases on relative grounds were Turbo (T-210/17), which involved a finding of no likelihood of confusion between the TURBO and TRIPLE TURBO devices, due to sufficient differences in the graphical elements, and Messi (T-554/14) on likelihood of confusion between Massi and Messi. This was a victory for footballer Lionel Messi and Carles noted that his fame was key to the General Court’s decision: “If everyone knows something, you don’t need to prove it.”

Session chair Johannes Fuhrmann of Bomhard IP added one final case on procedural pitfalls, where the lawyer was also the party in the dispute. The General Court found this application was manifestly admissible. “They are very picky with formalities,” said Johannes.

Sharing on Social Media? Use the link below...
Perm-A-Link: https://www.marques.org/blogs/class46?XID=BHA4678