The CJEU has confirmed that the German state of Bavaria can register a trade mark for the Neuschwanstein’s Castle’s name, dismissing an appeal by a souvenir industry association (Case C-488/16 P BSGE v EUIPO/Freistaat Bayern). In a joint post, Class 46 bloggers Birgit Clark and Anthonia Ghalamkarizadeh analyse the judgment 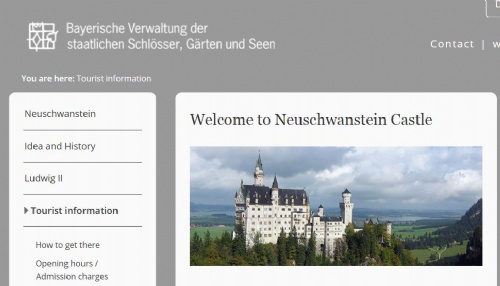 Germany is a country of many castles and one of the most famous of these castles is Neuschwanstein Castle. Neuschwanstein was one several castles which were commissioned by fairy tale King Ludwig II of Bavaria (also known as “Swan King”). Ludwig was slightly eccentric and neo-gothic Neuschwanstein was planned to be his retreat being elegantly situated on a hill near the city of Füssen in Bavaria. More than 1.3 million people visit the castle annually and it has also been featured in various films.

It is a truth universally acknowledged, where there is commercial success, there is scope for a trade mark dispute and so the story of the ongoing Neuschwanstein trade mark dispute begins. Alas, this is a fairy tale without a happy ending for many a valiant trader.

The Bavarian Castle Department, a division of the Bavarian State government, was concerned about the quality of the souvenir trade connected to the castle and, in an attempt to regulate the souvenir industry, registered the word mark “Neuschwanstein” as a German trade mark and as an EUTM. The German Federal Association Bundesverband Souvenir Geschenke Ehrenpreise eV (BSGE), a trade network of souvenir producers, filed invalidity applications against the mark at the German Patent and Trademark Office and the EUIPO, inter alia, arguing that the Neuschwanstein trade mark was akin to ‘censorship’ of the Neuschwanstein souvenir trade.

The BSGE succeeded in cancelling the German national trade mark (German Federal Court of Justice, case reference I ZB 13/11, of 8 March 2012) in respect of all goods and services with direct relevance to the tourism industry – i.e. typical souvenirs, snacks and beverages as well as complementary services such as catering for guests and travel organisation. However, the fate of the EUTM took a different turn.

The EUTM Neuschwanstein had been registered by the State of Bavaria in 2011 covering a broad range of goods and services. The BSGE subsequently filed an application for invalidity at the EUIPO arguing that the mark was descriptive, i.e. designated the geographical origin of the goods and services, as well as non-distinctive. The EUIPO disagreed and refused the invalidity application, which was confirmed by the EUIPO’s Board of Appeal and General Court (Case T-167/15). Notably, the Board of Appeal held that no bad faith on the part of state of Bavaria had been established for the purposes of Article 52(1)(b) EUTMR.

In its rejecting decision, the General Court held that the sign Neuschwanstein was an invented original name which functioned as a trade mark. It referred to the castle as a building, without establishing a link with the good and services in the sense of referring to their geographical origin. The castle itself was neither the place of production of the goods covered, nor the place where the services were offered and could therefore not be regarded as a reference to their geographical origin.

In its decision of 6 September 2018, the CJEU broadly agreed with the General Court and AG and held that the mark was neither descriptive nor non-distinctive, and was not filed in bad faith.

The fact that the goods were offered in a specific place “cannot constitute a descriptive indication of the geographical origin of those goods”.

The CJEU agreed with the General Court that the mark Neuschwanstein was distinctive. In this context, the CJEU explained that:

none of the services covered by the contested trade mark were directly offered onsite at Neuschwanstein Castle. Regarding the goods concerned, as the appellant itself acknowledges in its appeal, it cannot be excluded that they may be sold beyond that castle’s surroundings. In those circumstances, it is not reasonable to conclude that, in the mind of the relevant public, the place of marketing to which the name ‘Neuschwanstein’ relates is, as such, a description of a quality or an essential characteristic of the goods and services covered by the contested trade mark.

Therefore, the General Court had not erred in law in finding that “as Neuschwanstein Castle is not, as such, a place where goods are produced or services are rendered, the contested trade mark could not be indicative of the geographical origin of the goods and services it covers.”

Notably, the CJEU decided this point differently to the German Federal Court of Justice in the parallel proceedings concerning the German national mark for Neuschwanstein (see above). In this context, the CJEU stressed that the General Court had not been required to take the Bundesgerichtshof decision into consideration. The CJEU stressed once more that the EU trade mark system is an autonomous system with its own set of objectives and rules peculiar to it and that it applies independently of any national system (citing Rivella International v OHIM, C‑445/12 P).

Finally, the CJEU agreed with the General Court that the application was not made in bad faith, finding that appellant’s line of argument alleging bad faith was based on an incorrect reading of the Chocoladefabriken Lindt & Sprüngli (C‑529/07) decision:

even in a situation where [an] applicant files an application for registration of a sign with the sole aim of competing unfairly with a competitor who is using a similar sign, it cannot be excluded that the applicant’s registration of the sign may be in pursuit of a legitimate objective. [This can] be the case, in particular, where the applicant knows, when filing the application for registration, that a third party, who is a newcomer in the market, is trying to take advantage of that sign by copying its presentation, and the applicant seeks to register the sign with a view to preventing use of that presentation … Accordingly, it is not apparent from that judgment that the assessment of bad faith must necessarily take the means used to achieve such an objective into account.

As such, the CJEU dismissed the BGSE’s appeal in its entirety, and ordered it to bear the costs.

At first glance, the CJEU’s decision in Neuschwanstein seems to further develop – and even potentially contradict – the CJEU’s earlier decision in Windsurfing Chiemsee, where the CJEU had pointed out that the public interest necessitates the free availability of a geographical indication no least because it “may be an indication of the quality and other characteristics of the categories of goods concerned, and may also, in various ways, influence consumer tastes by, for instance, associating the goods with a place that may give rise to a favourable response”.

Notable is also the difference in approach between the German Federal Court of Justice which arguably followed Windsurfing Chiemsee more closely: when faced with a mug, which has a picture of the castle on it and says Neuschwanstein, will the consumer regard this as a souvenir from Neuschwanstein Castle, as the German court found, or as an indication of trade origin, as the CJEU held?

The Neuschwanstein decision is potentially bad news for the tourism and souvenir industry and gives the owners of famous sites an increased commercial leverage to monopolize the names of locations of cultural heritage. The decision also brings some uncertainty about the remaining scope of geographical references: In what ways can a retailer of souvenir goods now legitimately refer to the fact that the souvenir is a reminder of a certain location? Would a t-shirt showing the caste and saying “Greetings from Neuschwanstein” be an acceptable descriptive reference, while a t-shirt with a wash tag reading “Neuschwanstein” in a typical trade mark rendering would not be acceptable? Time will tell and it will be interesting to see how the decision will be applied by the various EU IP offices and national courts.

Sharing on Social Media? Use the link below...
Perm-A-Link: https://www.marques.org/blogs/class46?XID=BHA4670