Glen is a Gaelic word with a wonderful lyrical sound to it and reminiscent of idyllic remote Scottish valleys with the mists from the last rain perpetually lingering over their green slopes. Also, it happens that 31 out of 116 Scottish distilleries producing "Scotch Whisky", as protected by this geographical indication, are named after the glen in which they are located – Glenfiddich, Glenmorangie, Glenlivet, Glenfarclas, and many other fine drops. But is that enough to enjoin the use of "Glen" by a distillery outside of Scotland? The Scotch Whisky Association thinks so, and has brought infringement proceedings against the owner of the Waldhorn distillery in Southern Germany. He produces the whisky "Glen Buchenbach" – a pun derived from Berglen, the hometown of the distillery, and from the river Buchenbach which runs through its valley.

The District Court of Hamburg on considering the infringement action found that it raised several questions never yet answered in the prior case-law on geographical indications, and referred to the CJEU for clarification. Today, the CJEU gave its answers: It held, in essence, that the geographical indication "Scotch Whisky" could be infringed if consumers would directly think of "Scotch Whisky" when they see the German Whisky called "Glen Buchenbach". In giving its answers, the CJEU also raised a new question – which it will now be up to the national courts to grapple with. 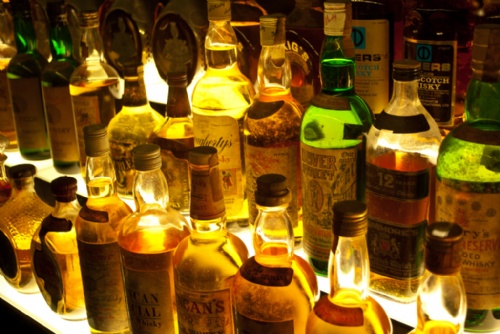 The challenged use of "Glen Buchenbach"

The defendant produces the whisky "Glen Buchenbach" in a distillery in Berglen in the German Buchenbach valley. The label of the bottles also includes detailed information about the local German origin of the whisky: "Waldhornbrennerei" [Waldhorn distillery], "Swabian Single Malt Whisky", "Deutsches Erzeugnis" [German product], as well as "hergestellt in Berglen" [produced in Berglen]. The plaintiff, the Scotch Whisky Association, filed an action for infringement of the registered geographical indication "Scotch Whisky" before the District Court of Hamburg. It argued that the Gaelic term "glen", used in the names of numerous whiskys of Scottish origin, constitutes an unlawful indirect use and evocation of the geographical indication "Scotch Whisky". Consumers would wrongly assume "Glen Buchenbach" to be produced in Scotland, despite the additional information on the bottles that clearly identifies the whisky as a product of German origin.

The District Court of Hamburg noted that the case raised several questions about the interpretation of the EU Regulation in question ("On the protection of geographical indications of Spirit Drinks", No. 110/2008):

The Decision of the CJEU

Today, the CJEU clarified the extent to which geographical indications enjoy protection under the Regulation:

First, an "indirect use" of a registered geographical indication requires that the designation in question is either identical or phonetically/visually similar to the protected designation – which is not the case here.

Second, there is an infringement based on an "evocation" of the protected indication if the average consumer in the EU (presumably of drinking age), when confronted with the product name in question, directly has an image of the product in mind for which the indication is protected. So does a consumer who sees the name "Glen Buchenbach" directly think of "Scotch Whisky"? This question cannot be answered in the affirmative, says the CJEU, if the disputed name only evokes some vague association with the geographical indication or the relevant region it refers to. This is a question of fact which will have to be addressed by the national infringement court.

Third, the Court held that when determining whether the use is infringing, no account may be taken of the surrounding context, not even when the disputed product name is accompanied by a clear reference to the true origin of the product.

The decision affords a broad scope of protection for indications of geographical origin under the Regulation, for two reasons: First, the CJEU holds that a designation can be infringing, as an "evocation", even if it not at all similar to the protected indication. And second, an infringement cannot be avoided by any surrounding clarifications about the true local origin of the product, be they ever so prominent.

This latter finding has the potential for particularly strong repercussions. The relevant provision on evocation in Art. 16 (b) of the Regulation states that the registered indication is protected even if the true origin of the product is indicated or the geographical indication is used in translation or accompanied by an expression such as "like", "type", or "style". But the District Court of Hamburg thought that this need not necessarily mean that the surrounding context had to be disregarded completely, beyond these two provisos. To allow some room for an overall assessment of the disputed use would have also been in line with the national protection of geographical indications of origin: Sec. 127 of the German Trademark Act allows for a flexible assessment in cases where the disputed designation is not used too prominently and is surrounded by clear clarifying information.

In contrast, the CJEU has now followed its earlier decisions on the irrelevance of circumstantial information. In doing so, the Court has raised a new question: What exactly is the disputed designation that must be the exclusive focus of the assessment? In our case, is it only "Glen"? Or "Glen Buchenbach" – which already sounds much less Gaelic? And if a product name were to be used in direct connection with the manufacturer's trade name, could that be taken into account an exclude infringement? These are questions the District Court of Hamburg will now have to address when applying the – slightly wobbly, cynics might say tipsy – guidance handed down by the CJEU.

Sharing on Social Media? Use the link below...
Perm-A-Link: https://www.marques.org/blogs/class46?XID=BHA4646