Brexit, Sleeping Beauty and CJEU case law were on the agenda on the final morning of this year’s Annual Conference.

The day opened not with an English breakfast but a Brexit breakfast at 8.30. Roland Mallinson of Taylor Wessing, who leads the MARQUES Brexit Task Force, provided an update on the latest thinking about IP rights and Brexit and invited comments from the audience on what position MARQUES should adopt. The aim is to publish a position paper by the end of next month. 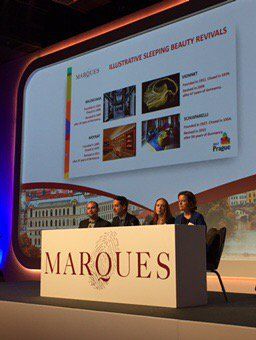 The next session – “Sleeping Beauty” – was not a reference to those Annual Conference attendees who had over-indulged at the Gala Dinner, but a discussion of brands that have been revived or deserve resurrection. Arnaud de Lummen of Luvanis, Imogen Fowler of Hogan Lovells and Alicia Chantrey of GSK took part in a panel moderated by Arthur Artinian of K&L Gates.

He said that while each revival is unique, it helps to have a back story: “It means you can start with the brand heritage, which can take a long time to be built.” Based on this back story, you can reactivate the core values of a brand for modern times. Positive signs are that the brand is in the history books, featured in fashion exhibitions or being collected by experts. “The cultural capital is stored and can be re-activated,” said Arnaud.

From a legal perspective, the first question is: “Is it really dormant?” said Imogen. The next is regarding ownership: “Are you talking to the right people?” Family names can give rise to particular issues, such as Jane Birkin’s objection to the Birkin bag, or there may be split ownership of the brand (as with SCRABBLE). Bad faith can also be an issue, as the SIMCA case demonstrated. Imogen also discussed challenges around proving use, citing last year’s PAL case at the General Court (Case T-397/15) and the CACTUS decision (Case T-24/13), which addressed whether a logo and a word element have the same “semantic content”. The CJEU ruling in that case is awaited.

Alicia discussed the SENSODYNE brand, which GSK acquired in 2001. The company changed the distribution and advertising to a dentist-led campaign: there are now 4,000 versions of this campaign in 100 countries. GSK inherited “a whole variety” of IP rights when it acquired the brand, said Alicia, and the challenge for the IP counsel is to trim down the IP portfolio. “We now have a very clear brand architecture, and global brand assets,” she said, adding that the IP department is seen as the “brand guardian” within the company. 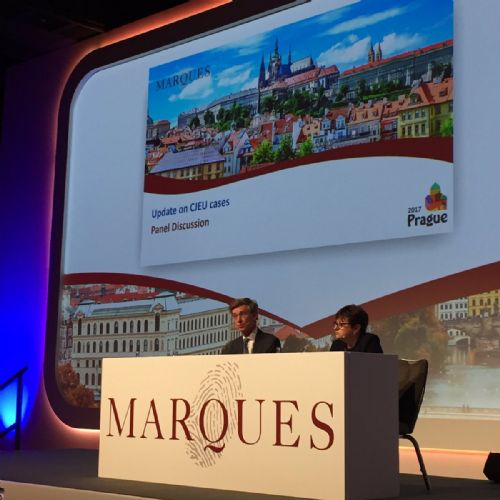 The Conference’s final session was a review of trade mark decisions from the CJEU. Patricia McGovern of DFMG Solicitors went through a large number of cases, including the following (click on the links for the English versions of the Court judgments):

combit Software v Commit Business Solutions, which said that national courts can carve out geographical areas where there is no likelihood of confusion. “It remains to be seen how that will be implemented in the various national courts in Europe,” said Patricia.

Westermann Lernspielverlag concerning the right to be heard and right to a fair trial.

Debonair Trading (the “So…” case) – a useful reminder to read judgments carefully to find opportunities to appeal!

BSH v EUIPO (Compressor v Kompressor): distinctiveness of earlier marks is only one fact to be considered as part of a global assessment.

Simba Toys v EUIPO & Seven Towns (the Rubik’s Cube case): a proper analysis of the shape must take into account additional information on the actual goods. “This is quite a significant decision saying you look at the actual product not just the depiction,” said Patricia.

Ferring v Orifarm - the latest in a long line of cases on packaging of parallel imports.

Mondelez v EUIPO regarding Nestlé’s application to register the shape of the KitKat bar, where the General Court said that you must show that distinctive character has been acquired in all the relevant Member States. The decision has been appealed to the CJEU.

New Wave v Alltoys (MEGABABE) regarding the interpretation of the Enforcement Directive.

Brandconcern v EUIPO (LAMBRETTA) which said that the IP TRANSLATOR ruling did not apply to earlier trade marks.

EUIPO v Szajner (LAGUIOLE) where the CJEU said the General Court should take into account interpretations of national courts in decisions based on unregistered rights.

August Storck v EUIPO: the criteria for assessing distinctiveness of 3D marks consisting of the shape of the product are no different to those for other types of marks

For Tune v EUIPO (FORTUNE-HOTELS) where the CJEU firmly rejected an attempt to challenge the General Court’s findings of fact.

Louboutin v Van Haren – where the Advocate General’s Opinion has been published, and the CJEU decision is awaited. AG Szpunar’s view was that the red shoe mark was not a colour per se mark but a mark consisting of the shape and a certain colour. If this reasoning is followed, will the mark be lost?

Ornua v Tindale & Stanton (KERRYGOLD), a case with an Irish angle which Patricia described as “particularly interesting” regarding the coexistence of marks in the EU, where the Court said likelihood of confusion must be assessed based on the facts in each country.

Länsförsäkringar v Matek which said that genuine use does not have to be shown during the first five years of the life of a mark.

Philippe Péters of NautaDutilh raised some additional points from the cases. The KOMPRESSOR case showed the importance of national registrations in oppositions, he said. The Matek case shows that trade marks have two lives: the first five years, and then immortality. Finally, he said COMBIT/COMMIT raised the question: which function? “I think it will need a new decision by the Court on that question,” he said.

There followed various contributions from the audience, before MARQUES Chair Gregor Versondert wrapped up the 31st Annual Conference, and previewed the 32nd, which takes place in Paris from 18th to 21st September next year.

Sharing on Social Media? Use the link below...
Perm-A-Link: https://www.marques.org/blogs/class46?XID=BHA4533