Trade Mark (EUTM) on the right to be invalid, because the mark did not enable consumers to identify clothing items as originating from a particular producer. As readers may (or may not) recognise, the mark is part of a group of "three-striped marks" owned by the German sportswear manufacturer Adidas AG ("EUTM Proprietor"). For several years, the three stripes have kept the European Courts and members of the Class 46 Blog, among many others, quite busy (see, for instance, here, here and here).

The latest episode in this saga concerns the above EUTM covering "clothing; footwear; headgear" in Class 25 ("Contested Mark"). In 2014, Shoe Branding Europe BVBA ("Cancellation Applicant") filed a request for a declaration of invalidity against the Contested Mark. The Cancellation Applicant argued, pursuant to Article 52(1)(a) in conjunction with Article 7(1)(b) of the European Union Trade Mark Regulation (EUTMR), that the mark was devoid of distinctive character (i.e., it would not be perceived as an indicator of commercial origin). The EUTM Proprietor claimed that the Courts had already confirmed the enhanced distinctiveness of the three-striped marks in the past.

In 2016, the Cancellation Division (CD) of the EUIPO upheld the invalidity request, finding that the three-striped mark was likely to go unnoticed by most consumers. There was nothing about the mark that was apt to make it stand out in relation to the covered goods. Even if the sign was noticed at all, it was not likely to be perceived as a trade mark. There was "no reason to believe that consumers would assume that three straight black vertical lines in ordinary font is primarily intended to denote a connection with a specific provider of clothing, footwear and headgear products".

Since three straight black vertical lines could be used in many different contexts as a decoration, the CD found it important to recall the public interest underlying Article 7(1)(b) EUTMR. This provision is generally understood to bar signs from registration which are incapable of fulfilling the essential function of a trade mark, namely to guarantee the identity of the origin of the marked product to the consumer by enabling him, without any confusion, to distinguish the product from others which have another origin. In the present case, however, the CD referred to the judgment of the Court of Justice of the European Union (CJEU) in Case C-329/02 P SAT.1 v OHIM. In that judgment, the Court held – in relation to trade mark registrations covering abstract colours – that Article 7(1)(b) EUTMR was (also) aimed at the need not to restrict unduly the availability of colours for the other operators who offer for sale goods of the same type as those in respect of which registration of the colour is sought. The CD went on to draw the following analogy between abstract colours and straight lines:

"The number of available simple signs utilising straight vertical or horizontal lines is extremely limited, like the number of available colours, and there is an obvious danger that their availability for the purpose of indicating commercial origin would be unduly restricted if vertical or horizontal straight lines were treated as inherently distinctive."

Consequently, the EUTM was held to lack inherent distinctiveness. The EUTM Proprietor also failed with its claim that the three-striped mark had acquired distinctiveness through use based on Article 7(3) EUTMR. Despite the 12,000 pages of evidence filed by the EUTM Proprietor, the CD saw "no basis on which to conclude that the contested mark is recognised as the EUTM proprietor's trade mark in the internal market of 500 million people".

This view has now been confirmed by the Second Board of Appeal (BoA) of the EUIPO, dismissing the EUTM Proprietor's appeal. The BoA did not comment in detail on the EUTM's inherent distinctiveness, since the EUTM Proprietor had apparently not disputed that part of the CD's decision. As regards acquired distinctiveness, the BoA largely agreed with the conclusion of the CD.

In the BoA's view, many exhibits provided by the EUTM Proprietor to prove use of the EUTM were of "doubtful value", because they did not show the mark in its registered form, nor in a mere variation of that form without altering its distinctive character. By way of example, the product depicted below on the left was found to bear "two not three parallel black (or dark) stripes against a white (or lighter coloured) background" (an argument which will be familiar to fans of the three-striped saga). Interestingly, the BoA found that, in the case of the product on the right, "the three stripes are a thick white against a dark background, the mirror image of the mark as registered".

(Any feedback from readers explaining why the number of black and white stripes should be treated differently in the two examples above would be welcome.)

However that may be, as regards several market surveys submitted by the EUTM Proprietor, the BoA found that the results of these surveys did not serve to establish acquired distinctiveness either. For instance, one of the surveys had little value, because it invited subjects to "mentally associate a picture of a shoe bearing three stripes (one of the EUTM proprietor's marks, but not the mark at issue) with the Adidas brand." Another survey merely found a significant association between phrases such as "three stripes" and Adidas. Since this survey was not based on any visual appreciation of the Contested Mark, its value was uncertain. In conclusion, nothing was known about how intensive, geographically widespread and long-standing use of the mark has been. The BoA held that the decision of the CD had to be upheld and the EUTM declared invalid.

The decisions of the CD and the BoA set a high water mark for the quality of evidence that is expected of a trade mark owner or applicant who wishes to rely on acquired distinctiveness. It is debatable whether the Office's strict view may have been partly guided by the desired outcome, namely to keep certain design elements in the fashion industry free to be used by competitors.

Regardless of whether the outcome of the decisions is justified, this Blogger finds some of the factual / psychological 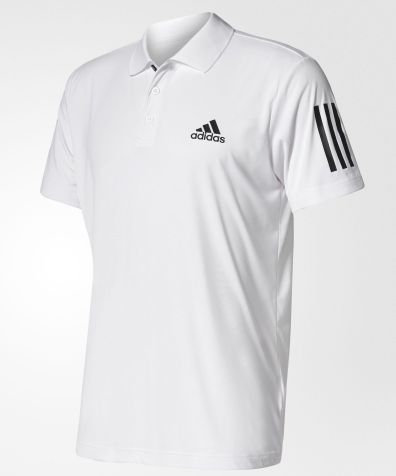 observations made by the EUIPO concerning the consumer's perception of the Contested Mark remarkable. For instance, the observation that it is "difficult to see why such a simple design in normal font and the colour black should attract the attention of the consumer" seems somewhat counterintuitive. There are, at least, some examples where it is actually difficult to imagine that the design could escape the attention of the consumer (e.g., on the right). Under these circumstances, the EUIPO's assumption that the three stripes are "likely to go unnoticed by most consumers" is quite bold.

Whether consumers will actually perceive the stripes on clothing as a trade mark is, of course, a different and much more difficult question. The EUIPO contends that the stripes are "at least as likely to be perceived as a simple decoration on a shirt or hat". While this may very well be the case, one cannot help but wonder how the Office knows this to be true on an abstract level.

Similarly striking is the EUIPO's comment that the three-striped design might be perceived as a trade mark if it "contained something in addition to the three lines […] that would draw attention to the lines" (e.g., the stripes could be "placed inside a geometrical figure such as a square, […] or set into a differently coloured background"). Current research in behavioural science suggests that the perception and understanding of a mark, or any other piece of information, does indeed depend to large extent on the specific context. But if we accept, following the EUIPO's reasoning, that consumers perceive three black stripes on a white background as a mere decoration, it is not entirely clear why the same stripes on a, say, blue background should be perceived as a trade mark. In any event, it does seem fair to assume that the three stripes will continue to keep trade mark practitioners on their toes for some time to come.

Sharing on Social Media? Use the link below...
Perm-A-Link: https://www.marques.org/blogs/class46?XID=BHA4485