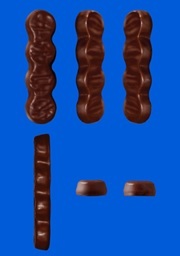 The General Court dismissed the appeal. First, it rejected the applicant´s argument that the appropriate level of public attention was higher because teenagers are a sophisticated and picky consumer, like to create trends for social prestige and their consumption would be particularly motivated by the "desire to eat something good and different."

Second, the fact that the the bar was composed of four circular portions did not confer distinctive character since the circular shape was a basic geometric shape and that the relevant public is accustomed to find and consume chocolate bars divided into juxtaposed portions.

Moreover, the Court upheld the reasoning of the BoA regarding goods in Class 5. For pharmaceuticals, the mark was devoid of any distinctive character since the consumer would perceive the mark as a variant of these medicinal tablets tablets interconnected so as to separate them from each other .  For food, dietary and pharmaceutical animal, these products could, from the perspective of the consumer (veterinary or average consumer expert), come in the form of bar, like that in the mark.  Finally, for baby food,  the consumer would associate the brand in the form of a type of biscuit made ​​of a row of four rounded portions. Moreover, because of its rounded appearance and its narrow and elongated shape, the Board of Appeal found that the baby could well hold one end of the bar with his hand and put the other in his mouth. So the consumer would grant no distinctive feature to the shape in question, but would see a utilitarian function.

Sharing on Social Media? Use the link below...
Perm-A-Link: https://www.marques.org/blogs/class46?XID=BHA4382