In Judgment T‑803/14, the General Court dismissed the applicant’s appeal and confirmed the rejection of its EU trade mark application. The following marks were in conflict in this case:

First,  the relevant public consisted of all consumers within the EU and the goods concerned are directed at the general public with an average level of attention.

Next, the goods covered by the contested mark, namely isotonic beverages (not for medical purposes) and high energy drinks, fall within the category of non-alcoholic drinks covered by the earlier mark.

Furthermore, the signs are visually similar to a low degree, but are, by contrast, phonetically similar to a certain degree, and, in addition, they refer to the same concept, namely the colour blue. In addition, contrary to what the applicant maintains, the weak distinctive character of the element ‘blu’, taken in isolation, does not have the effect of automatically conferring on the other element of the earlier mark, ‘san miguel’, a distinctive and dominant character. 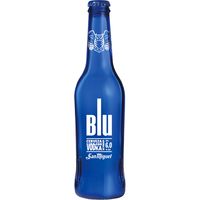 Whether that other element has such a distinctive and dominant character must be assessed in the light of its inherent qualities and of the weight that it has in that mark in relation to the element ‘blu’.

Therefore, in the light of the average distinctiveness of the earlier mark — inter alia since the element ‘de san miguel’ is not descriptive  — and of the particular importance of the element ‘blu’ at the beginning of the mark, which part of the relevant public would tend to use  to distinguish it from other signs including the element "san miguel",  or even abbreviate the mark to "blu", likelihood of confusion between the marks could not be excluded.

For blue painted in the blue listen here

Sharing on Social Media? Use the link below...
Perm-A-Link: https://www.marques.org/blogs/class46?XID=BHA4373