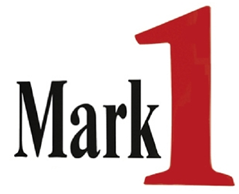 for tobacco related goods and eletcronic cigarettes in classes 9 and 34.

The EUIPO rejected both marks on the ground that the marks were devoid of any distinctive character within the meaning of Article 7(1)(b)  CTMR.

The relevant public consists of both the average consumer in the general public and the average consumer in a specialist public. The number 1 refers in general to first or highest in rank and that the word 'mark' is an English word which is synonymous with 'trademark'. Thus, according to the Board of Appeal, the signs applied for are a reference to the fact that the goods at issue are placed first in the ranking of cigarette brands. In the figurative mark, the configuration of the graphic elements and colours, namely, black for the word 'mark' and red for the number 1, were not sufficient to confer distinctive character on the sign applied for. In fact, the red colour suggested that the product was 'number 1'. Furthermore, the font of the letters was not unusual. The signs applied for fulfilled an advertising function only and did not enable the origin of the goods to be identified.

The Applicant appealed to the General Court claiming that the word 'mark' is not descriptive. In its meaning as a mark or as a synonym of the English word 'trademark', it is very imaginative not to give the name of a product, but to call it simply a mark. Moreover, the word could be understood equally in the sense of marking or scratching in German or as the abbreviation of the former German currency. Furthermore, the word 'mark' refers to a well known first name in English, for which the applicant cites a certain number of famous examples. Also, in spite of the fact that the advertising slogan for cigarettes under the mark Mark Adams No1 is 'The No1 brandï', the applicant maintained that the consumer would not perceive this slogan in the sense of a ranking, in as much as it refers to the bestselling brand. On the contrary, the average consumer knows that cigarettes of this brand are not the bestselling on the market.

The Court dismissed the appeals: the fact that the word 'mark' is capable of having several meanings is not decisive. When assessing the mark applied for as a whole, that it has, clearly and essentially, a laudatory and promotional meaning for the goods concerned. In fact, it suggests to the relevant public essentially the idea of a 'number 1 brand' for the goods. Therefore the marks lack any distinctive character.

Sharing on Social Media? Use the link below...
Perm-A-Link: https://www.marques.org/blogs/class46?XID=BHA4371