The General Court rendered a judgment  (see Judgment T-683/13),  in a case where the general consumer is made up, for the most part, of Class 46 readers and in general IP practionners.

The OD upheld the opposition concluding that there was a likelihood of confusion between the marks within the meaning of Article 8 paragraph 1 b) of Regulation No 207/2009.

As regards the comparison of the signs, they are similar in their visual impression and they are similar phonetically. Conceptually, the signs at issue would present a similarity to the extent that they are related to Community trade marks, but nevertheless differences exist in that the mark applied for would include a play on words between "mark" and "marker", unlike the earlier mark.

In the context of the assessment of likelihood of confusion, due to the similarity or identity of the services on the one hand, and of the signs, on the other hand, a risk confusion could not be excluded even if the earlier mark had, as it does here, a very weak distinctive character, for the relevant public consisting of particularly attentive professionals.

The General Court annulled partially the decision finding that the BoA has erred in its conclusion regarding the similarity of services in class 38 " Providing access to database services for searching for the availability and specifications of community trademarks and designs" and those of EURIMARK. 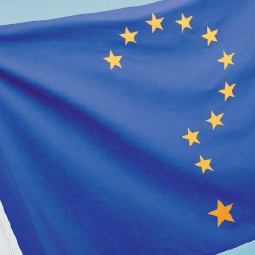 The services in question are aimed at different customers, because although it could not be ruled out that  a software developer designed for the provider of a database server a software enabling it to improve its research on CTMs, the client for this developer consisted of server providers, not beneficiaries of telecommunications services, for example, lawyers or companies who search for CTM's.

According to the BOA, software development is mainly computer-related, while the services covered by EUROMARKER are more in the field of telecommunications and differ in nature.The Board of Appeal concluded  that the services in question differed in their nature, purpose and use since they are not being intended for the same audience, nor are they interchangeable or complementary, and hence would not compete with each other.

Having regard to these considerations, which are not challenged by the parties, the BoA thus erred in concluding that those services were slightly similar.

The Court upheld the contested decision with regard to the other findings. Moreover, it rejected the applicant's argument that there would be no likelihood of confusion between the marks on the grounds that they would match only in their non-dominant, descriptive and non-distinctive "eur" and "mark", and  that they differed in all other aspects.

Sharing on Social Media? Use the link below...
Perm-A-Link: https://www.marques.org/blogs/class46?XID=BHA4299