In Case T-534/13, the General Court dismissed the appeal in this invalidity action.

The Cancellation Division rejected the application for invalidity in its entirety on the grounds that , firstly , there is no likelihood of confusion and , secondly , the contested mark does not take unfair advantage of the distinctive character or the repute of DONUT and DONUTS marks.

The Board of Appeal upheld this decision and found, first, that the brand DONUTS CREAM was no longer in use and, secondly, that the information provided by the applicant were not sufficient to demonstrate genuine use of the mark DOGHNUTS, so it was appropriate not to consider these two brands.

Thirdly, the conflicting signs were not similar visually, and there was at most a low degree of phonetic similarity between them and it was not possible to make a conceptual comparison of the signs. 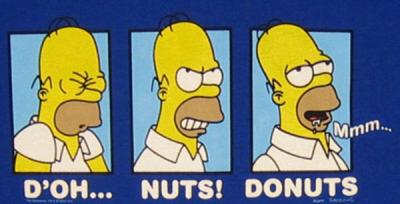 The word elements' krispy "and" kreme 'of the contested mark were the ones that attracted the most attention of the relevant public since, first, the size of their letters was substantially larger than that of the other word element' donuts ", secondly they occupied the central position of the sign and, thirdly, they were the only word elements written in a stylized manner. The word 'donut' and the graphic elements of the mark DONUTS have a different visual complexity and structure to that of the contested mark. Although the word elements 'donuts' on the one hand, and 'donut' or 'donuts', on the other hand, have many letters in common, it is clear that the word element 'donuts' contains two or three letters more than the word elements' donut "and" donut ". While these verbal elements are perceived as vocables more or less short, the word 'donuts' is a term of medium length. It follows that, taken as a whole, the signs at issue are not similar visually.

As regards the similarity of the signs on a conceptual level, the Board of Appeal rightly held that the word elements' donuts "," donut "and" donut "do not belong to the usual vocabulary of the Spanish language, so that the relevant public in Spain would not associate them to a concrete concept. The same reasoning applies to other verbal elements 'krispy "and" kreme' of the contested mark. Without special meaning of the word elements of the marks, it is not possible to compare them conceptually. If the relevant public would still establish  association between the word 'kreme "and the concept of" cream ", the signs are different aurally. As for the Portuguese public, the Board of Appeal without being contradicted by the parties, was based on the same considerations to find that it was not possible to make a comparison of the marks on the conceptual perspective.

Moreover, it was not possible to determine the pronunciation of the word 'donuts' by the relevant public with certainty. In the first place, this element contains a combination of consonants that is foreign to the Spanish and Portuguese languages, namely "gh". Second, the combination of vowels "or" contained in this element is not common in Spanish and is in substance limited to foreign words in which it is normally pronounced "or". Third, with regard to Spanish, in the combination of consonants' ghn "while the letter" h "will normally be silent, the remaining combination" gn "is common in Spanish and pronounced" g'ne ". In such circumstances, it is not possible to predict with certainty the manner in which the relevant public, including Spanish, pronounce the word 'donuts

Consequently, the low degree of similarity between the signs at issue, limited to the phonetic level, was not enough to create a likelihood of confusion even though the earlier marks enjoyed d a reputation and hence there was no risk of confusion between the conflicting marks.

Sharing on Social Media? Use the link below...
Perm-A-Link: https://www.marques.org/blogs/class46?XID=BHA4208