In case T-607/13, the General Court confirmed there is a likelihood of confusion between the following signs for vodka products.

The relevant public is composed of both the average consumer and the specialized consumer with a higher degree of attention for Class 35 services.

The goods and services are similar or identical.

As regards the signs, they have visual, phonetic and conceptual similarity because they are dominated by the number 42.  Indeed in the contested CTM, the elements "Jemna vodka vyráběná jedinečnou technologií" , “VODKA” and "42% vol. "are negligible in the overall impression created by the mark. Further, the number ‘42’ plays a central role in the earlier trade mark. In contrast, the term "below" is located below the number 42 and is written in significantly lower character size. It cannot be ruled out that part of the relevant public might associate the number 42 as the degree of strength of alcoholic beverages covered by the earlier mark, despite the fact that the number 42 is not followed by the words "% vol. ", the word  "alcohol "or" alc." Even if one assumes that ‘42’ has a weak disti

nctive character,  because of its place, its size and its particular style in the sign, it is the element of the marks which dominates the public perception.

The graphic differences noted by the applicant are quite marginal and almost imperceptible even for an attentive audience, whether professional or not. Indeed, it can not be totally excluded that the effect of "crushed ice", used in the mark applied for is perceived by the relevant public as the result of poor print quality. It should also be noted that the general public might perceive the effect of "crushed ice" as the result of condensation formed on the bottle when served cold in restaurants, bars or nightclubs.

Conceptually wise, the Court rejected the applicant’s arguments that in the earlier international mark, the number 42 would indicate that the products contain less than 42% alcohol [actually it used to be 84proof but was reduced to 42 for international markets see here ], whereas, in the contested mark, the number 42 exactly reflects the percentage of alcohol contained in the products concerned (42%) . So was his claim that he would be the only producer of vodka to use an alcoholic strength of 42% and that this percentage would be distinctive with respect to vodka whereas in the earlier mark, the number 42 would refer to the place of manufacture of the products concerned by the former owner of the brand, which was located below the 42nd parallel (namely Baccardi's New Zealand subsisdiary). 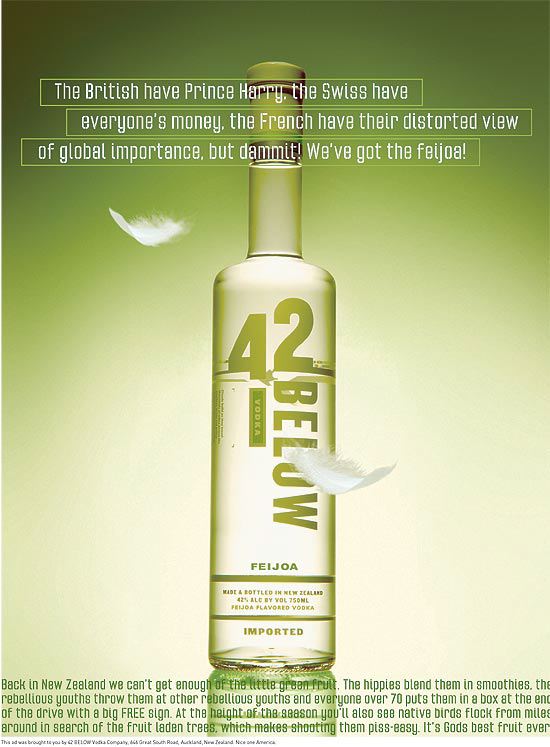 Furthermore, the earlier international mark  enjoys reputation  in the UK for vodka and should therefore be considered as being a highly distinctive character because of its use in that country. Accordingly, there is a likelihood of confusion between the conflicting marks within the meaning of Article 8 paragraph 1 b) of Regulation No 207/2009.

Click here for more creative 42Below ads (better than MadMen)

Sharing on Social Media? Use the link below...
Perm-A-Link: https://www.marques.org/blogs/class46?XID=BHA4085