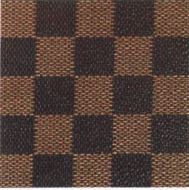 The invalidity action was based on the entire range of absolute grounds : Nanu-Nana claimed that, in accordance with Article 52(1)(a) and Article 7(1)(b), (c), (d), (e)(iii) and (f) of Regulation No 207/2009, the contested CTM’s were descriptive and devoid of any distinctive character, had become customary in the current language or in the bona fide and established practices of the trade, consisted exclusively of the shape which gives substantial value to the goods and were contrary to public policy or to accepted principles of morality. It also claimed that LV had acted in bad faith when filing the application for the trade mark, within the meaning of Article 52(1)(b) of CTMR.

Both the Cancellation Division and the First Board of Appeal upheld the application for a declaration of invalidity on the basis of Article 7(1)(b) and Article 7(3) of CTMR.

First the chequerboard pattern is a basic and banal feature composed of very simple elements and it is well-known that that feature has been commonly used with a decorative purpose in relation to various goods, including those falling within Class 18. In the absence of features capable of distinguishing it from other representations of chequerboards, the contested CTM’s are not capable of fulfilling the essential ‘identification’ or ‘origin’ function of a trade mark. Furthermore, the weft and warp structure of the contested trade marks do not constitute a substantial feature and do not give it a distinctive character. Moreover, the fact that the weft and warp structure of those trade marks have been copied do not demonstrate that it acted as an indication of commercial origin for the relevant public. Therefore the contested trade marks are very simple and contained no element capable of individualising it in such a way that it would not appear as a common and basic chequerboard pattern. Moreover signs such as the contested trade marks are typically used as supplementary signs which coexisted beside the manufacturer’s house mark and, therefore, the trade marks are devoid of any distinctive character.

In addition the BoA considered that the documents produced by LV did not demonstrate that the relevant public would be in the habit of making an assumption on the commercial origin of the goods at hand based on patterns. Lastly, on the basis of the evidence provided by LV, it had not been established that the contested trade marks had acquired distinctive character through the use which had been made of it in a substantial part of the relevant territory, namely in Bulgaria, Denmark, Estonia, Latvia, Lithuania, Malta, Poland, Portugal, Slovenia, the Slovak Republic, Finland and Sweden, either at its filing date or after its registration (CTM nº6587851) and in at least a substantial part of the European Union, namely Denmark, Portugal, Finland and Sweden ( for CTM nº370445).

LV’s claims before the GC

The Court then found that the Board rightly held held that the contested CTM’s coincided with the appearance of the products in question. Consequently, the BoA was fully entitled to base its assessment of the distinctive character of the contested marks on the principles regarding 3D marks applicable for a figurative mark consisting of a part of the shape of the product that it represents, inasmuch as the relevant public will immediately and without further thought perceive it as a representation of a particularly interesting or attractive detail of the product in question, rather than as an indication of its commercial origin (quoting this case-law as reported on Class 46).

The Court also found that it is clear from information contained in OHIM’s case-file that such a pattern has been commonly used in the decorative sector (in particular, clothes and floor tiles) and also appears in the Bayeux tapestry. On the other hand, the weft and warp pattern that appears on the inside of each of the chequerboard squares corresponds with the desired visual effect of interlacing two different fabrics, of whatever type they may be (wool, silk, leather, etc.), which is thus customary as regards goods such as those within Class 18.

Applied to the goods within Class 18 at issue, the presentation of a chequerboard in the alternating colours of light and dark grey and the impression of interlacing threads do not, from a graphic point of view, contain any notable variation in relation to the conventional presentation of such goods, so that the relevant public will in fact perceive only a commonplace and everyday pattern.

The juxtaposition of a chequerboard and of a weft and warp pattern does not give rise to any element that diverges from the norm or customs of the sector concerned; accordingly, LV’s submission that the contested mark is complex, particular and original cannot succeed.

LV claimed that the burden rested on Nanu-Nana and the BoA cannot make up for the shortcomings of the applicant for a declaration of invalidity by relying on its own ‘general experience’ in order to rebut the presumption of validity of the registration of the contested marks.

However the Court also rejected this argument: the BoA had found that the chequerboard pattern was a basic and banal figurative feature composed of very simple elements was a well-known fact and also considered whether that finding was substantiated by the evidence relied on Nanu-Nana such as the use of the chequerboard pattern had been used in the decorative arts sector.

‘Exhibit 1: a document called “Damier Canvas Trademark Portfolio”, which is a list of the CTM proprietor’s trade marks registered in different countries of the world.

– Exhibit4: a table with figures for the CTM proprietor’s products sold between 1996 and 2010, their turnover in euros and the total product quantity sold for the CTM in question, for the following countries: Belgium, Luxembourg, the Netherlands, Austria, the Czech Republic, Hungary, Romania, Cyprus, France, Germany, Greece, Italy, Denmark, Finland, Sweden, Portugal, Spain, Ireland and the United Kingdom; there was no other evidence to substantiate the information contained in that document, in particular other accounting documents certified by a firm qualified to certify those accounts, which could corroborate the figures set out in it.

– Exhibit 5: compilation of articles and advertisements from different magazines, showing products bearing the CTM proprietor’s chequerboard design. The magazines are from the following countries: France, Belgium, Luxembourg, Austria, the United Kingdom, Germany, Switzerland, the Netherlands, Spain, Sweden, Italy, the Czech Republic, Greece, Turkey, Norway, Hungary and Romania. Exhibit 5 further contains a Wikipedia entry about Louis Vuitton; AND Exhibit 7: list of Louis Vuitton stores. As regards the Member States of the European Union, the CTM proprietor’s stores in the following countries are listed: France, Austria, Belgium, Cyprus, the Czech Republic, Denmark, Finland, Germany, Greece, Hungary, Ireland, Italy, Luxembourg, the Netherlands, Portugal, Romania, Spain, Sweden and the United Kingdom; those docs do not provide any indication as to the perception of the contested mark by the public concerned.

– Exhibit 8: photographs of products with chequerboard designs not originating from the CTM proprietor, which are claimed to be imitations of the CTM proprietor’s products.’ photographs of various personalities carrying goods bearing the contested mark or advertisements of goods bearing that mark prove only that the applicant has used the brown and beige chequerboard pattern and do not demonstrate that the target public for the goods in question perceives that mark as an indication of commercial origin

Furthermore,in the proceedings before OHIM, as the Board of Appeal correctly observed in paragraph 62 of the contested decision, LV never claimed that the items referred to above were intended to show that the contested mark had acquired distinctive character through use. In addition , in its statement dated 23 September 2010

before the Cancellation Division, in response to an argument made by Nanu-Nana which considered that LV claimed the acquisition of distinctive character through use, the applicant stated that ‘the proprietor never claimed that the contested mark [had] acquired distinctiveness through use’ and that ‘[it had] always maintained that the DAMIER [was] inherently distinctive, and [had] only [drawn] attention to the fact that such inherent distinctiveness was further increased through almost 15 years of extensive use’.

Finally, the material submitted by the CTM proprietor on appeal (see CD-ROM and letter of 9 November 2011) did not contains any element which completes the evidence submitted before the Cancellation Division as regards these Member States, in particular no elements which could be relevant in establishing the relevant public’s perception of the contested CTM in the above mentioned countries.

This case was also covered by our dear friends from IPKAT , see here

Sharing on Social Media? Use the link below...
Perm-A-Link: https://www.marques.org/blogs/class46?XID=BHA4067