Only a couple of days ago our colleague Laetitia posted this item on the fate of the application to register the word GREENWORLD as a Community trade mark for fossil fuel and energy goods and services. In the light of that decision of the General Court, it is good to compare the following decision of the Finnish Market Court when dealing with a not dissimilar mark and some highly similar legal issues:

The Market Court in Finland, in a slightly older but very interesting decision of 16 December 2013, made a statement on the distinctiveness of the trade mark GREEN SMOKE, an international trade mark application in the name of Green Smoke, Inc. and designating Finland, for “electronic cigarettes” in class 34.

The Finnish Trade Mark Office, in 14 May 2013, held that the trade mark GREEN SMOKE lacked distinctiveness as it expressed the kind, quality and purpose of use of the goods in question. The Office explained that the mark consisted of two words that lacked distinctiveness: “green” meaning green as a colour or as an ecological concept and “smoke”, meaning a cigarette or tobacco. The Office added that the mark GREEN SMOKE was not distinctive either, when considered as a whole. It could not therefore distinguish the goods of the applicant from the corresponding goods of other parties. 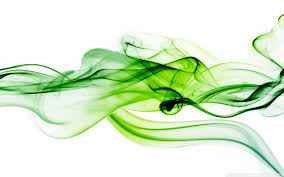 On account of the transitional provisions relating to the Market Court which came about in the autumn of 2013, the applicant’s appeal proceeded directly to the Market Court. In its appeal the applicant stated that GREEN SMOKE was distinctive since the word “green” had a variety of meanings that differed depending on the situation in which the word is used and that, accordingly, the interpretation of the Trade Mark Office was not correct, there being neither green cigarettes nor green smoke. Further, the applicant stated that there was no indication that the word green suggest that the goods were ecological or that it would even refer to them as such. Regarding the word “smoke”, the applicant stated that there were also multiple interpretations. Finally, the trade mark had been accepted in several other countries – especially in English-speaking ones. The Trade Mark Office maintained its view and stated that the grounds submitted by the applicant did not bring about any issues that would change its decision.

The applicant further stated that, even though the average Finnish person would understand the English words “green” and “smoke” in the way described by the Trade Mark Office, that would not result in their understanding the mark to refer to an ecological electrical cigarette or a green cigarette.

The Market Court based its evaluation on Section 13 of the Trade Marks Act which lists the requirements for registration of a trade mark. By Section 13, to be eligible for registration, a mark must be capable of distinguishing the proprietor's goods from those of others. Additionally a mark that denotes either alone or with only few alterations or additions, the kind, quality, quantity, use, price or place or time of manufacture of the goods shall not, as such, be regarded as distinctive. Also when assessing whether a mark possesses distinguishing power, all the factual circumstances must be borne in mind, particularly the length of time and extent to which the mark has been used.

The Market Court stated in its judgment that the word “green” in GREEN SMOKE was primarily referring to the colour green. Even though this meaning can refer to the quality of the goods, the goods in question are electronic cigarettes that are not green in colour. As to the other meanings of the word “green”, they refer to for example environmentally friendly products and to nature, which can to some extent refer to the quality of the goods in question. The link is however so unclear that the target group cannot, without putting some thought into the matter, figure out what the word is meant to mean in this context. Thus the word GREEN is distinctive in this connection.

The Market Court was of the opinion that the Finnish average consumer would connect word “smoke” to smoke, smoking of cigarettes and cigarettes and that this was thus the non-distinctive part of the trade mark GREEN SMOKE.

In conclusion, the Market Court stated that the mark GREEN SMOKE had no specific meaning as a whole that would directly and immediately describe a characteristic of electronic cigarettes. Thus the trade mark was able to distinguish the goods of the applicant from the goods of other parties and could be registered in Finland, satisfying the requirements of Section 13 of the Trade Marks Act. The Market Court therefore reversed the decision of the Trade Mark Office and returned the mark to the Office to be registered (it is now registered with the national registration number 1083399 in Finland).

The decision of the Market Court (Decision MAO: 516/13 GREEN SMOKE) can be found here (in Finnish).

Sharing on Social Media? Use the link below...
Perm-A-Link: https://www.marques.org/blogs/class46?XID=BHA4039