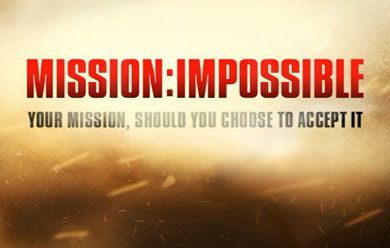 The Market Court in Finland gave a decision in September 2014 (MAO: 646/14) in a trade mark dispute between Paramount Pictures Corporation and a Finnish company Rautakesko Oy, which ran a building, renovation and home improvement products and services business. The dispute proceeded from the Board of Appeal of the Finnish Trade Mark Office to the Market Court after the Trade Mark Office rejected Paramount’s challenge to the registration of the trade mark MISSION POSSIBLE.

The main issues were first, whether Rautakesko’s national trade mark registration MISSION POSSIBLE (no 252379 of 31 December 2010) was confusingly to Paramount’s Community trade mark registration MISSION IMPOSSIBLE (no. 9472515 of 25 October 2010). According to the Finnish Trade Marks Act (Chapter 1, Section 14(1), Point 9) a trade mark shall not be registered if it is liable to be confused with a Community trade mark that has been registered on the basis of an earlier application.  Additionally, trade symbols shall be regarded under the Act as liable to cause confusion only if they apply to goods of identical or similar type (stated in Chapter 1, Section 6(1) of the same Act; the same principle applies to services, as stated in Chapter 1, Section 1(3)).

The Market Court secondly had to consider whether the trade mark MISSION IMPOSSIBLE was considered a trade mark with a reputation against the goods and services covered by Rautakesko’s MISSION POSSIBLE. According to the Finnish Act (Chapter 1, Section 6(2)) confusion of trade symbols may be judged in favour of a symbol that has a reputation in Finland where the use of another's trade symbol without due cause would constitute unfair exploitation of, or action detrimental to, the distinctive character or fame of the earlier trade symbol.

Comparing the similarity of the goods and services in question, the Market Court noted that MISSION IMPOSSIBLE was registered for specific goods and services in classes 9, 14, 16, 18, 25, 28, 35 and 41, while MISSION POSSIBLE was registered for specified goods and services in classes 1, 2, 4, 5, 6, 7, 8, 11, 17, 19, 20, 21, 22, 24, 27, 34, 35, 36, 37, 39, 45. Market Court did not disagree with the view of the Board of Appeal of the Finnish Trade Mark Office that “metal foils” in class 6 for MISSION POSSIBLE was similar to “plastic foils” in class 16 for MISSION IMPOSSIBLE. In other respects the goods and services were very different. Regarding class 35, the Market Court found the parties’ services to be completely different from each other as the goods of the prior registration concerned sales promotion of various occasions and events whereas the services of the later mark covered mainly office functions and retail sale of different goods to be sold in hardware stores.

On this basis the Market Court stated that, when assessing the trade marks as a whole, they were not confusingly similar. Taking note of the similarity evaluation as a whole (as in the decision of the Board of Appeal of the Finnish Trade Mark Office), there was also no confusing similarity as regards to the “plastic foils” and “metal foils” mentioned above.

There being no confusing similarity between the trade marks, the Market Court then assessed whether the trade mark MISSION IMPOSSIBLE was a trade mark with a reputation. This requires that a significant part of the target group for the goods and services of the earlier mark know the mark in question. All the matters that are considered significant are evaluated, such as market share, the intensity with which the trade mark is used, the geographical extent and time of the use and the efforts that the company has invested in making the trade mark known.

Paramount had submitted material to the Market Court including newspaper clips, ratings in Finland and worldwide, publication information on DVD and VHS in certain countries and clips from a movie database showing the awards that the Mission Impossible movies have won. Some of the material was regarding the Mission Impossible movies and some of the material on Mission Impossible TV series. The Market Court stated that the material shows that both the movie and the TV series are -- at least to some extent -- known worldwide and in Europe. However, regarding Finland, the material is scant and was insufficient to show that the target group knew the trade mark MISSION IMPOSSIBLE before the filing date of the MISSION POSSIBLE trade mark. Accordingly the trade mark MISSION IMPOSSIBLE is not a trade mark with a reputation in Finland.

Based on all of the above, the Market Court dismissed the claim made by Paramount. The case is a good basic example on the evaluation of both likelihood of confusion and the elements in evaluating trade mark with a reputation -- naturally with the delicious flavour of the movie industry.

The decision can be found here (in Finnish).

Posted by: Blog Administrator @ 08.42
Tags: Finland, infringement, comparison of goods and services, mark with a reputation,

Sharing on Social Media? Use the link below...
Perm-A-Link: https://www.marques.org/blogs/class46?XID=BHA4015