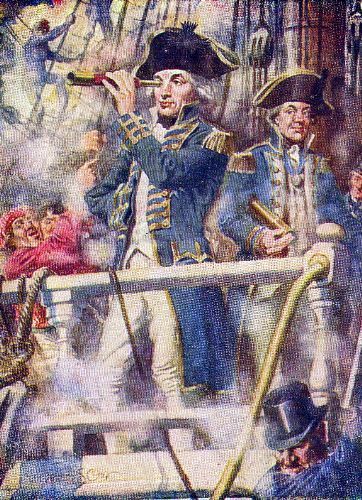 On 7 November the 8th Chamber of the Alicante Court of Appeal, acting in its capacity as the Spanish Community Trade Mark Court (being the second instance for all Spanish CTM cases), confirmed the decision of the Alicante Community Trade Mark Court in a case concerning alleged infringement by a formerly-authorized distributor of goods bearing the plaintiff's CTM. The case was a little unusual since it required considerable technical debate on the functionality of the disputed goods (high-tech optical devices for military use), including the deposition of a technical expert at the trial -- a most infrequent event in Spanish trade mark litigation.

Right: monoculars have a long and distinguished tradition in European culture

The claimant, a US corporation, owned several CTMs for "military optical apparatus" and "vision devices" in Class 9. Among other night vision products, the claimant made and marketed night vision binoculars and monoculars. The defendants were two Spanish companies which marketed and distributed equipment for military and security use and which, until 2007 were authorized distributors of the claimant's products.

After the termination of the distribution agreement, the claimant discovered that the defendants were offering infringing goods to the Spanish Army and that they were also advertising online night vision "binoculars" bearing the claimant’s registered trade mark. These so-called binoculars were actually two monoculars (which were intended for independent use) that had been joined together.

This being so, the claimant (and its licensee) sued the Spanish ex-distributors, alleging CTM infringement and unfair competition through misleading conducts  This claim was entirely upheld by the CTM Court, whereupon the defendants appealed.

Upholding the trial court's decision, the Court of Appeal affirmed that it was correct to declare that the claimant's rights had been infringed, and that the damages caused by that infringement had to be compensated.

As shown by the technical expert witnessing at the trial, monoculars and binoculars each serve a different technical purpose. Accordingly the fact that the monoculars had been manipulated by the defendants into “binoculars” affected the functionality and original quality of the contested products. Under Article 13(2) of the CTM Regulation, the court therefore concluded that the exhaustion of rights principle would not apply: even if the monoculars were proved to be authentic, which wasn’t the case, there would be legitimate reasons for the claimant to oppose the commercialization  under its trade mark of the artificially-made “binoculars”.

The court agreed that a trade mark owner cannot prohibit a third party from using its trade mark for merely informative purposes. Even so, said the court, citing Portakabin (C-558/08), there were no limitations imposed on the trade mark right since the mark was being used in a way which created a false impression of a commercial connection between the two undertakings.

In light of the above and with accordance to the documentation provided by the claimant during the proceedings, the Spanish CTM Court of Appeal upheld the permanent injunction issued by the trial court, the finding of unfair competition (through misleading conduct), the recall of infringing products, publication of the judgment and the damages award based on a fair market royalty rate over infringing sales.

Sharing on Social Media? Use the link below...
Perm-A-Link: https://www.marques.org/blogs/class46?XID=BHA3936