OHIM’s Fourth Board of Appeal delved in the world of cable vehicles and the effect of uppercase / lowercase characters combination  in Case R 450/2014-4. The applicant filed the following figurative (yes figurative) mark, which OHIM in its database and the Applicant in the proceedings name “AIRTRAM”.

The mark was filed in connection with “Vehicles for locomotion by land or rail; cable transport apparatus and installations; cars for cable transport installations; telpher railways [cable cars]; sleighs [vehicles]” in Class 12 and met the Examiner’s refusal on the grounds that it is an easily comprehensible combination of AIR and TRAM “that complies with English grammar rules, and does not amount to an unusual juxtaposition. It immediately informs the relevant public, comprising of both average consumers and professionals, that the goods applied-for are electric vehicles for transporting people that run on metal tracks, which are placed above the ground.” and that the mark’s figurative elements “are so minimal in nature that they do not endow the sign applied-for as a whole any distinctive character. Moreover, there are no additional elements that could be regarded as fanciful or imaginative, and therefore the combination of words applied-for is not able to distinguish the goods of the applicant from those of others.” 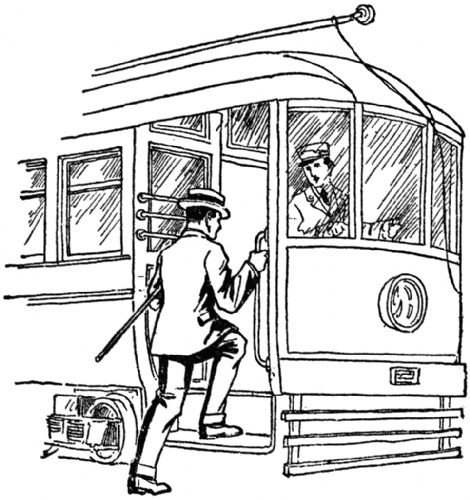 The limitation entailed, as the BoA, correctly noted that the goods no longer include ‘vehicles for locomotion on land or rail’, and accordingly do not cover tramways.

The BoA held it were “more natural” to separate the mark into two parts out of which only the first letter is in uppercase, namely as ‘ALR TRAM’, and not as one single word ‘Airtram’, in particular as that word as such does not even exist. Under this prism, the sign applied-for has a clear and non-equivocal meaning. In the BoA’s view, even assuming that  the first two letters are perceived as ‘A’ and ‘I’, the fact that they are written in uppercase typeface may lead to impression that ‘AI’ is in fact an abbreviation. As far as the word “tram” is concerned, the BoA held that the good applied for, even though serving to transport people, cannot be described as ‘trams’, since the essential feature of a tram is the fact that it is a vehicle which operates on rails.

In view of the above, the BoA accepted the appeal and let the mark proceed.

This blogger is a bit puzzled: Is it not more natural (and isn’t there also relevant case law) for the relent public to “break down marks into meaningful words”? Why would anyone think “ALR” and not “AIR” – what does ALR mean? The question is how much direct is “air tram” for “cable transport apparatus and installations”? It is not an easy question, though this blogger would, respectfully, tend to think direct enough.

Sharing on Social Media? Use the link below...
Perm-A-Link: https://www.marques.org/blogs/class46?XID=BHA3847