Künzli SwissSchuh AG (Switzerland) filed an application for a declaration of invalidity concerning all the products protected under the registration of the Community trade mark, on the basis of Article51(1)(a) and Article7(1)(b) ofCTMR.

The Cancellation Division upheld the cancellation action on the basis that the contested CTM which is presented in the specific form of a design with five stripes, did not constitute an ‘adequate point of contact’ in order to fulfil the function consisting of indicating the commercial origin of the products concerned, that the five stripes placed on the shoe were basic geometric shapes and would be perceived as a technical means to reinforce the shoe or as a pure embellishment of an indistinct, common nature. It inferred from this that the consumer would accord them only fleeting attention.

The Board of Appeal and General Court confirmed the findings.

First, the goods are intended for a potentially unlimited number of consumers of any age group thus the average consumer is the relevant public. Second, according to well-established case-law, average consumers are not in the habit of making assumptions as to the commercial origin of products on the basis of signs which are indistinguishable from the appearance of the goods themselves, whether those signs are figurative, three-dimensional or other, such signs are distinctive only if they depart significantly from the norms or customs of the sector.

Therefore the Court had to examine whether the mark at issue is indistinguishable from the appearance of the product designated or whether it is, on the contrary, independent of it. In this case, there is nothing about the sign at issue that makes it distinguishable from the appearance of the product that it covers. The product being represented using a dotted line does not render the whole representation distinctive, since this is a minor detail which fails to draw the consumer’s attention away from the fact that the sign represents a shoe.

The Board of Appeal added that even if the CTM were to be considered to be a two-dimensional design consisting of five parallel stripes placed on a specific part of the surface of the designated products, it does not possess the required minimum degree of distinctive character since that design does not depart significantly from the standard designs that are shown on the sides of these kind of products and will be perceived simply as decoration. 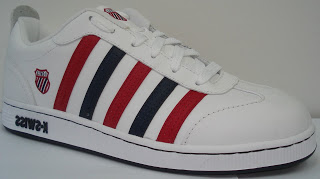 K-Swiss argued before OHIM and the Court that stripes can function as a badge of origin for other manufacturers because in the sports and leisure shoe sector, consumers are accustomed to making assumptions as to the commercial origin of products based on simple signs, composed of lines or stripes placed on the products, in particular on the side of them. In response, both the BoA and Court pointed out that the acquired distinctive value was a result of the intensive use. In the present case, K-Swiss did not prove that the five parallel stripes, applied to the external surface of shoes, could be apprehended without the intrinsic characteristics of those shoes being simultaneously perceived. It has not therefore proven that those five stripes could be easily and instantly recalled by the relevant public as a distinctive sign.

Finally, regarding the onus of proof, the GC confirmed that the CTM owner/applicant must provide specific and substantiated evidence that the trade mark applied for has an intrinsic distinctive character, since it is much better placed to do so, given its thorough knowledge of the market (see, to that effect,Orange colouring of the toe of a sock,paragraph16 above) ---a principle seemingly questionable in cancellation actions where an attacked CTM should benefit from a presumption of validity---

This Judgment contradicts a decision from Switzerland on the same mark, as reported on class 46 by Mark Schweizer here http://marques.org/class46/Default.asp?XID=BHA3162

Sharing on Social Media? Use the link below...
Perm-A-Link: https://www.marques.org/blogs/class46?XID=BHA3751