In Case T-25/13, the General Court held that there is a likelihood of confusion between the following marks:

The applicant sought to register the sign "4711 Aqua Mirabilis" as a CTM for the goods mentioned in the table above. Sacra opposed the application for "soaps; perfumery, essential oils, cosmetics, hair lotions; dentifrices" based on the earlier trade mark "AQUA ADMIRABILIS" by claiming that there was a likelihood of confusion, contrary to Article 8(1)(b) of the CTMR. Both the Opposition Division and the Board of Appeal (BoA) ruled in favour of the opponent in relation to all the contested goods with the exception of "dentifrices". 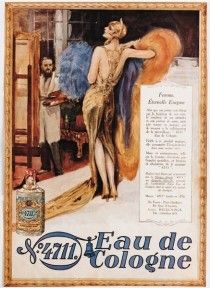 For those readers not familiar with Mäurer & Wirtz, that company owns the "No 4711" brand, which stands for a well-known Eau de Cologne that has been produced under this trade name since the beginning of the 19th century. The Latin name "aqua mirabilis", on the other hand, can be translated into English as "miracle water". According to the German Wikipedia, this generic term describes mixtures that contain various ingredients and are used in perfume or for medical and cosmetic purposes. The words "aqua admirabilis", with the added syllable "ad", appear to be a minor deviation from this term without a change in meaning.

Mäurer & Wirtz appealed to the General Court. It was not in dispute that the goods covered by the two marks were identical or similar, but the applicant argued that consumers would not be confused since the earlier CTM had a weak distinctive character and the signs were not sufficiently similar. These arguments did not convince the judges, who dismissed the appeal.

The General Court compared the signs in relation to their visual, aural and conceptual similarity. The marks were visually similar, since the first component "4711" of the sign applied for was not a significant differentiating factor and the remaining word elements, "aqua" and "mirabilis", were almost identical to the earlier mark. There was a high degree of aural similarity between the signs, because the word elements were again almost identical and consumers were unlikely to pronounce the number "4711". Conceptually, the marks were deemed to be similar or neutral, given that the majority of consumers would understand the similar meaning of the Latin words "aqua mirabilis" and "aqua admirabilis", whereas the remainder were likely to regard them as neutral.

According to the General Court, it was unnecessary to decide the issue of whether or not the earlier mark had a weak distinctive character since the identity or similarity of the goods and signs would in any case be sufficient to establish the likelihood of confusion.

The General Court’s decision seems counterintuitive, as it provides a high level of protection for "AQUA ADMIRABILIS", a name which has a relatively descriptive meaning in Latin. This result, however, has to be seen in the context of case T-341/06, in which the General Court established that the average consumer is unlikely to understand the meaning of Latin words. As a consequence, words that are considered to be descriptive in English, i.e. "miracle water", are allegedly not perceived as such when used in Latin. There are exceptions to this rule, for example if the relevant public consists of professionals who are familiar with scientific vocabulary in Latin, but this exception does not apply to the facts at hand (see case T-286/08). That being said, the General Court has in part disregarded its own guidelines by claiming that a large proportion of the relevant public would understand the similar meaning of the (Latin) words "aqua mirabilis" and "aqua admirabilis".

At first, it might appear that the ruling does not attach sufficient significance to the number "4711" as a differentiating factor. In particular, it is not clear on which basis the court found that consumers will not pronounce this number, since various trade marks containing numbers are commonly referred to in aural form, for instance "No 5" for fragrances. Therefore, it is arguable that the two marks are not sufficiently similar and therefore consumers are less likely to be confused. The circumstances of the present case, however, resemble to some extent the facts of Medion C-120/04 (reported by the IPKat here). In this instance, the CJEU held that there can be a likelihood of confusion where a mark applied for contains the earlier mark of a competitor combined with the prominent company name of the applicant (the marks relevant to the case were "LIFE" and "THOMPSON LIFE"). The earlier registration ought to be protected under these circumstances, since large companies or owners of well-known brands such as "4711" would otherwise be entitled to 'recycle' earlier trade marks simply by combining them with their own brands.

Sharing on Social Media? Use the link below...
Perm-A-Link: https://www.marques.org/blogs/class46?XID=BHA3637