Readers of this blog are probably quite familiar with the somewhat classic problems and aspirations of brand owners regarding 'position marks', i.e. marks that  consist of a particular device or word (or both) positioned on a particular place of the products designated. The mark depicted below was filed as an IR designating the EU in connection with footwear in class 25. 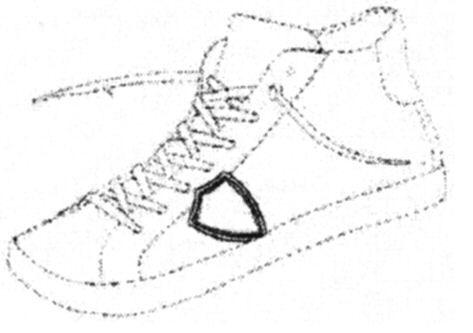 The Examiner refused the application on the grounds that the mark "consisted merely of a ‘small shield in a concrete position’, which could not be considered ‘unique’ or ‘exceptional’" and that it was "a ‘banal tag’ which was not capable of distinguishing the goods of a particular undertaking".

However, on appeal, the Board of Appeal thought otherwise and allowed the mark to proceed to publication. It noted that position marks, such as the one above, have for many years become increasingly common on footwear and that consumers "have become accustomed to identifying a particular brand of running shoe or sports shirt based only on a distinctive pattern or design. The extensive use of advertising on television, Internet and in the printed media have, in the eyes of the relevant public, asserted the power of a design, even a relatively simple one, to be able to act as a distinguishing sign". The Board of Appeal went on to rule that although the mark involved is "not high in distinctive character" or "particularly original", it nevertheless displays that necessary minimum of distinctive character, because it is "sufficiently eccentric in geometrical terms to defy being described as a ‘banal tag’".

Sharing on Social Media? Use the link below...
Perm-A-Link: https://www.marques.org/blogs/class46?XID=BHA3367