In case T-508/10, Seba Diş Tįcaret ve Naklįyat AŞ (Turkey) had registered its figurative CTM “Seba Tradition” which was the object of a cancellation action on relative grounds by Joh. Wilh. von Eicken GmbH (Germany) on the basis of earlier German mark both registered for Class34 ‘tobacco products’ 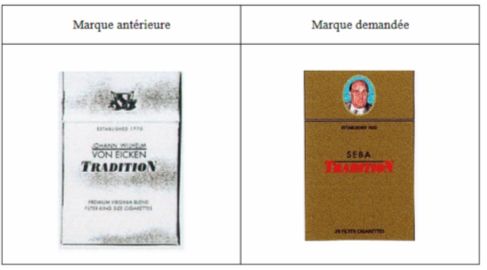 The Opposition Division and Board of Appeal upheld the action and cancelled the CTM. The General Court dismissed the appeal confirming that for identical goods, due to the similarity from visual and conceptual perspective found there was a likelihood of confusion according to Article 8 (1) b) CTMR. It confirmed that the dominant element in both marks is the word TRADITION whereas the other elements will not attract the consumer’s attention as much, such as “johann Wilhelm” , “von eicken” or “seba”. The consumers won’t refer to the other elements “established 1935” , “20 filter cigarettes” and “established 1770”, “premium Virginia blend filter king size cigarettes” due to the small size.

Even if taking into consideration the descriptive or weak character of TRADTION for those goods, the GC concluded it does not exclude the likelihood of confusion between those trademarks.

Sharing on Social Media? Use the link below...
Perm-A-Link: https://www.marques.org/blogs/class46?XID=BHA3300