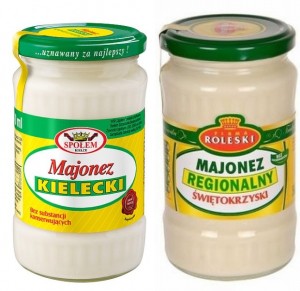 Wytwórcza Spółdzielnia Pracy SPOŁEM (WSP SPOŁEM) from Kielce (the capital city of the Świętokrzyskie Voivodeship) sued ROLESKI Sp. J. for the infringement of word and figurative trade marks R-197616, R-170401, R-123588 and R-193780 and unfair competition torts/delicts. Both Polish companies produce different mayonnaise products that are sold in jars of a similar capacity. WSM Społem is a manufacturer of "Majonez KIELECKI". In 2008, ROLESKI produced mayonnaise in a package bearing the designation "Świętokrzyski". The label of this package was modified twice, by removing the word "Świętokrzyski" and by replacing it, during courts' proceedings, by the word "Regionalny". WSP SPOŁEM asked the District Court in Kraków to secure the claims and to issue preliminary injunction in order to prohibit ROLESKI, until the final decision is rendered, the sale of mayonnaise in a jar with a label containing a yellow background, a centered white box in the shape of an ellipse with a green border, and a green jar lid, and a round yellow sticker connected with jar's side, and to seize and retain, until the final decision is issued, of all products held by the defendant in the form of mayonnaise packages with labels containing centered yellow background, a centered white or yellow field in a shape similar to an ellipse, framed or underlined by a green or red line, with a green round jar lids and a yellow label (band) connected to jar's side, and also containing any of the elements described above.

ROLESKI requested the Court to dismiss the suit. The Company argued that it does not counterfeit products of WSP SPOŁEM as it manufactures own products bearing reputable trade mark, which in consequence, eliminates not only identity, but also the similarity of products. ROLESKI noted that if the two parties compete under their own brands, there is no harm to the reputation and distinctive character of their trade marks. According to ROLESKI, WSM Społem mistaken reputation of the registered trade mark with the concept of the reputation of a product. As a result, it does not prove the reputation of the figurative mark R-197616, but generally a particular product "Majonez KIELECKI". WSM by designating its product with a word "Majonez KIELECKI" indicates only its generic name and determine the place of origin, and therefore such trade mark is devoid of any distinctive character, as opposed to the trade mark used by ROLESKI, that is a distinctive sign. 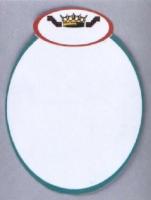 The District Court in Kraków in its judgment of 23 May 2012 case file IX GC 86/10 found that graphics of mayonnaise packages produced and marketed by ROLESKI were modeled on the graphics of mayonnaise package produced and marketed by WSP SPOŁEM. The Court noted that similarities outweighed the differences. The Court made findings of facts on the basis of documents submitted by the parties, as well as the testimony of witnesses and the opinion of an expert witness, except for the part where the expert speaks about the intentions of the designer's of ROLESKI's trade marks. The Court asked the expert on the likeness of packages containing the elements of trade marks and the impact of possible similarity on the likelihood of consumer confusion. The Court also found that ROLESKI used the word "Świętokrzyski", but the office of the company was located in another voivodeship (Małopolska Voivodeship, in the Tarnów community), which was deemed as an act of unfair competition. ROLESKI filed an appeal complaint.

The Appeallate Court in Kraków in its judgment of 15 January 2013 case file I ACa 1268/12 dismissed it and ruled that the District Court has made ​​the appropriate findings. The Court noted that the evidence and testimony of expert witness allowed for a clear and comprehensive answer to the question of similarity of the goods, understood as a whole, including packaging, manufactured and marketed by the parties, taking into account changes made by ROLESKI in the appearance of mayonnaise packaging produced by the Company from Tarnów.

The Court confirmed that by the use of the word "Świętokrzyski" together other elements similar to those attributed to WSM Społem, ROLESKI has exploited a set of associations created by WSM Społem for the product, which is mayonnaise with a specific package. The use of the additional word "Świętokrzyski" perpetuated these associations and allowed the Court to treat ROLESKI's action as an act of unfair competition. ROLESKI appealed directly to the reputation of the product of WSM Społem by invoking the name of the capital of Świętokrzyskie region.

The Court acknowledged similarity of the vast of words and figurative elements of packaging. All the elements visible on the packaging of both parties, although they include other wordings, by the use of the same color and compositional arrangement lead to customer confusion as to the origin of the goods, and it also constituted an act of unfair competition. Posted by: Tomasz Rychlicki @ 10.52
Tags: knock-offs, likelihood of confusion, look-alikes, Polish Appeallate Court, Polish courts, product packaging, similarity of signs, slavish imitation, trade mark infringement, unfair competition delict,

Sharing on Social Media? Use the link below...
Perm-A-Link: https://www.marques.org/blogs/class46?XID=BHA3280