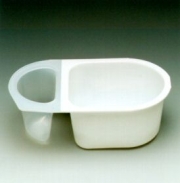 Bakoma sp. z o.o. from Warsaw requested the Polish Patent Office to invalidate in part in Classes 29 and 30 the right of protection for the 3D trade mark IR-700040 owned by Compagnie Gervais Danone. Some time ago, Danone sued Bakoma for the trade mark infringement, arguing that Bakoma has used similar product packaging for its line of Frutica yoghurts. Bakoma claimed that the sign in question lacks distinctiveness and it was applied in bad faith, because Danone did not intent to use this trade mark in form it was applied for. Bakoma pointed that Danone also owned registered design for a similar packaging, and the registration of trade mark was intended to extend the protection provided for a design, and it could indicate that Danone wanted to bypass the law.

Danone argued that Bakoma does not distinguish between the concept of functionality and the technical features that may give the impression that the functionality is a prerequisite to prohibit registration. Patent attorneys representing Danone cited judgments of the CJUE and noted that only forms which are simply based on technical solution are not subject to the trade mark registration, and the sign in question clearly lacks of such solutions. Danone claimed that the package has not technical features because the container does not provide a transfer of filling (from a smaller to a larger compartment), it does not prevent from shedding, and it's not a compact package. In addition, Danone argued that Bakoma failed to prove that at the time of the trade application on the Polish market, there were similar packaging that would prevent registration of an industrial design (formerly called ornamental designs), which means that the design was new. Danone emphasized that the mark at issue can not be used on to market alone, without any label. The French company also provided evidence that the trade mark is recognized by the consumers. At the time of trade mark application, the sign was present on the market for almost 14 years and it has acquired the secondary meaning. Its use was confirmed in advertisements and price lists.

Bakoma argued that the technical solution solves a problem. In this case, as a result, how to mix one component with another, and how to serve it mixed - a solution to this problem is to move the component. These functional features are technical. Such example was even displayed in the commercial movie during the hearing. Bakoma stated that the 3D sign was not distinctive at the date of application, nor it has acquired the secondary meaning, because a 3D form can be a trademark when the average recipient will associate it with the origin of the goods. 3D form can attract the attention of consumers in terms of aesthetics, but it does not mean that it functions as a trade mark. There is no doubt that goods may be aesthetic, may encourage the purchase, but do not work as a sign. In addition, the sign could not acquire secondary meaning because it is used as a technical function, utility function. Bakoma argued that Danone seeks for the right of protection for a sign that was not intended to be used in the applied form. Even, while deciding trademark infringement case, the Appeallate Court ruled that Danone uses in the course of trade a combined mark. Bakoma argued that through the registration of the trade mark Danone wanted to obtain a monopoly on technical solutions with the use of the institution of the right of protection for a trade mark. It is a clear example of bad faith.

On 19 November 2012, the Adjudicative Board of the Polish Patent Office held its hearing, case no. Sp. 500/10. Danone's representative has requested the PPO to postpone the hearing to allow him to get acquaint with the pleading filed by Bakoma. The PPO acceded, and set a two-week deadline. The PPO obliged both parties to complete all claims in a period of two months, under pain of losing the chance to raise them at a later date. Bakoma also requested the Polish Patent Office to decide on the lapse of the protection for the 3D trade mark IR-700040, however the PPO did not schedule the hearing in this case, no. Sp. 513/08. Posted by: Tomasz Rychlicki @ 08.45
Tags: 3D trade mark, acquired distinctiveness, non-traditional trade marks, Polish Patent Office, trade mark invalidation, trade mark lapse,

Sharing on Social Media? Use the link below...
Perm-A-Link: https://www.marques.org/blogs/class46?XID=BHA3049