In case T-534/10, Garmo AG (Germany) filed an application for registration of word CTM HELLIM for ‘Milk and milk products’ in Class 29.

Organismos Kypriakis Galaktokomikis Viomichanias (Cyprus) filed a notice of opposition on basis of the earlier Community collective word mark HALLOUMI also registered in Class 29 for ‘Cheese’ on the grounds of Article 8 (1) (b) CTMR.

The Opposition Division dismissed the opposition on the ground that, notwithstanding the fact that the goods concerned were identical or similar, there was no likelihood of confusion between the signs HELLIM and HALLOUMI which were not visually or phonetically similar. Conceptually, the signs at issue had a certain similarity for consumers, given that the two terms were used to designate a specialty cheese. In addition, the earlier mark had weak distinctive character in Cyprus since the term ‘halloumi’ designates a specialty cheese from Cyprus. On account of that weak distinctive character of the earlier mark, the conceptual similarity could not offset the visual and phonetic differences between the signs at issue, with the result that there was no likelihood of confusion.

The Board of Appeal held that, visually and phonetically, there was a low degree of similarity between the signs at issue and the applicant has failed entirely to adduce tangible evidence to support its claim that the word ‘hellim’ is pronounced as ‘hellimi’ by the Cypriot public.

Conceptually, the BoA held that Turkish was not an official language of the European Union with the result that the possible meaning of the word ‘hellim’ in Turkish was not decisive in assessing the likelihood of confusion.

However, the Court held that while Turkish is not an official language of the EU, it is none the less, common ground that it is one of the official languages of the Republic of Cyprus. The conclusion must therefore be drawn that Turkish is understood and spoken by part of the population of Cyprus.

With regard to conceptual similarity, what must be taken into consideration is the point of view of consumers within EU territory for whom the two words have a meaning.

In the present case, it is common ground that, conceptually, the Turkish translation of the Greek word ‘halloumi’ is ‘hellim’. From that perspective, it cannot be disputed that the average consumer in Cyprus, where both Greek and Turkish are official languages, will understand that the words ‘halloumi’ or ‘hellim’ both refer to the same specialty cheese from Cyprus

Moreover, even if the public were to recognise the designation of a specialty cheese from Cyprus, this would have no impact since it had a purely descriptive meaning and could not be used as a basis for comparison of the signs. The conceptual comparison is therefore neutral. 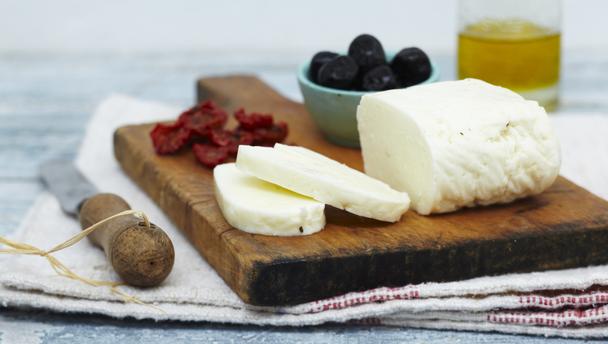 Third, so far as concerns the likelihood of confusion, the Board of Appeal found, that the earlier mark being a collective mark did not necessarily mean that it had an average degree of distinctive character. The BoA observed that the collective mark could be distinguished from the individual mark by the fact that the ground for refusal relating to a descriptive geographical indication was not applicable to it, since the collective mark distinguished the goods which it covered according to the fact that they originated from a group of regional producers.

The applicant claimed that due to the specific characteristics of the collective mark, the application for which is privileged under Article 66(2) of Regulation No207/2009, it must rather lead to the conclusion that the mark has at least average distinctive character.

However, as OHIM argued “the second sentence of Article 66(2) states expressly that a collective mark cannot entitle the proprietor to prohibit a third party from using, in the course of trade, such signs or indications, on condition that that third party uses them in accordance with honest practices in industrial or commercial matters; in particular, such a mark may not be invoked against a third party who is entitled to use a geographical name.”

Given that the earlier mark had weak distinctive character, as well as in the light of the low degree of visual and phonetic similarity between the signs at issue, there is no likelihood of confusion, even though the goods concerned are identical and similar.

Sharing on Social Media? Use the link below...
Perm-A-Link: https://www.marques.org/blogs/class46?XID=BHA2946