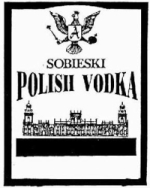 On 1 March 1994, the company France-Euro Agro applied to the Polish Patent Office for the registration of the word trade mark SOBIESKI Z-130304 for goods in Class 33 such as alcoholic beverages except beer. In its decision of March 1997, the PPO refused to register the applied trade mark because of the similarity with the word-figurative trade mark A SOBIESKI POLISH VODKA R-85456, that was registered with the earlier priority for the same goods in Class 33. This trade mark is currently owned by BELVEDERE S.A. France-Euro Agro withdrew its request for re-examination of the case. However, on December 2005, BELVEDERE requested the PPO to repeal the refusal. BELVEDERE based its request on the provisions of the Polish Administrative Proceedings Code which say that a final decision, on the basis of which none of the parties acquired any rights, may be at any time repealed or amended by the public administration authority which issued the decision or by the authority of higher level if it is justified by the public interest or fair interest of the party.

The Company noted that the risk of misleading potential consumers has been eliminated as the owner of both trade marks is now the same entity. BELVEDERE argued also that the PPO does not respect the constitutional rule of law and equal treatment of entities in the application of law, because it has registered three word-figurative trade marks Jan III Sobieski SJ for BRITISH AMERICAN TOBACCO POLSKA TRADING Sp. z o.o., despite the existence of the earlier right of protection for the trade mark A SOBIESKI POLISH VODKA R-85456. The PPO refused to repeal the decision of 1997. The PPO emphasized that decisions taken in such proceedings are discretionary, which means that the PPO examines, whether in the particular situation, the public interest or the fair interests of a party is in favor of the repeal of the final decision. The requirements of public interest or the interests of the parties must be assessed on an individual case and must receive individualized content, resulting from the factual and legal issues. The interest of the party should be "fair" within the objective meaning i.e. it has to be justified by circumstances of the case and accepted under applicable law, also from the standpoint of public interest. According to Polish legal doctrine, the term "public interest" is not defined by the law, and the content of this concept is given by the adjudicating body. The scope of the discretion of the administrative body during the recognition of such issues is limited, for instance by the existence of general principles of administrative proceedings, such as the public interest and fair interest of citizens. The fair interests of citizens is not only deemed as the interest of parties involved in this particular case, but also the interests of other parties to the proceedings before the Patent Office, in this case those who have applied for trade marks after the refusal of March 1997. By withdrawing the request for re-examination of the matter, France-Euro Agro waived its right to appeal, which led to the ultimate end of the proceedings and allowed other entities to apply for trade mark protection. BELVEDERE filed a complaint against this decision.

The Voivodeship Administrative Court in Warsaw in its judgment of 7 December 2011 case file VI SA/Wa 1239/11 dismissed it and held that the proceedings to repeal the final decision should not be regarded as a retrial of the case. The Court held that both the institution of proceedings de novo, as well as the repeal of the final decision, are procedures used to verify the faulty decisions, that allows for setting the decision aside, in the situations specified by law, despite its finality. Given the exceptional nature of these procedures, they cannot be abused by a broad interpretation of the conditions of admissibility of their application. The overriding principle is to guarantee the sustainability of the final administrative decision. The Court agreed with the PPO that BELVEDERE could file requests for the invalidation of the rights of protection for trade marks JAN III SOBIESKI JS. Posted by: Tomasz Rychlicki @ 09.50
Tags: Polish Act on Industrial Property Law, Polish Administrative Proceedings Code, Polish Constitution, similarity of goods, similarity of signs, trade mark refusal, Voivodeship Administrative Court,

Sharing on Social Media? Use the link below...
Perm-A-Link: https://www.marques.org/blogs/class46?XID=BHA2932