In case T-276/09, the General Court had to examine the likelihood of confusion between YAKUT, registered for Class 33 ‘alcoholic beverages (except beers)’ and earlier figurative CTM

registered for Classes 29 and 32 goods ‘Beers; mineral and aerated waters and other non‑alcoholic drinks; fruit drinks and fruit juices; syrups and other preparations for making beverages’.

The Opposition Division and the Board of Appeal upheld the opposition on the basis of Article 8(1)(b) CTMR finding that the goods in question were similar, as were the signs at issue, from both a visual and phonetic point of view. It also found that the signs at issue did not convey any particular concept given that they had no meaning in the languages concerned.

The GC confirmed the conclusion of the OHIM. Firstly, well-established that case‑law establishes that the term ‘alcoholic beverages’ includes cider, as well as ‘alcopops’, and that those beverages are very similar to beer. It also follows that, apart from wines and spirits, alcoholic drinks, including beer, are consumed for the same reason and have the same distribution outlets.There is, therefore, a large degree of similarity between the ‘beers’ covered by the earlier mark and the ‘alcoholic beverages (except beers)’ covered by the mark applied for.That high degree of similarity is not called into question or lessened by the fact that there is only a low degree of similarity, or indeed none at all, between certain goods in the broad category of goods covered by the mark applied for.

Second, it should be taken into account of the fact that the average consumer only rarely has the chance to 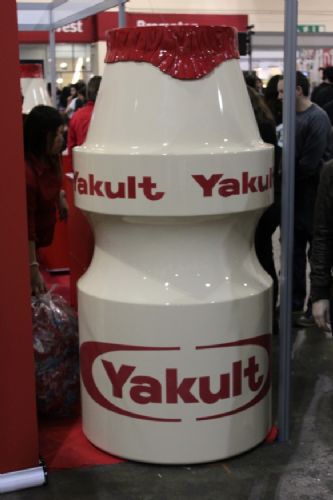 make a direct comparison between the different marks but must rely on his imperfect recollection of them. From a visual point of view, it must be held that, in the two signs at issue, the letters ‘y’, ‘a’, ‘k’, ‘u’ and ‘t’ are reproduced in the same order, with the word element ‘yakult’ of the earlier sign containing only one additional letter, namely the letter ‘l’, placed second to last. First, the consumer generally pays greater attention to the beginning of a mark than to the end and, secondly, the additional letter ‘l’ and the adjacent letter ‘t’ together form ‘lt’, that is to say, tall and narrow letters which do not go below the base line. The additional letter ‘l’ is thus barely visible and, ultimately, the difference between the two signs at issue is scarcely noticeable by the average consumer, who would not remember such a subtle difference, even assuming that he had noticed it.

As for the graphic element of the earlier figurative mark, the only element capable of being distinctive consists of shapes similar to brackets which merely surround the word element ‘yakult’. That element cannot be regarded as the dominant element in the overall impression produced by the sign Yakult. It is a sort of outline, in oval form, that is to say, a simple geometric form which will not evoke any particular concept for the average consumer.

Sharing on Social Media? Use the link below...
Perm-A-Link: https://www.marques.org/blogs/class46?XID=BHA2869