The average consumer might not know it but trademark lawyers have to review their beer classics outside of the pub (should it become a prerequisite for the TM bar exam?) since they are increasingly facing EU trademarks battles more or less confusing . As it turns out, Bavaria beer is actually Dutch while Budweiser is not just the most famous American lager, it has been the "The Beer of Kings” and brewed in České Budějovice, Czech Republic since the 13th century.

The General Court in Case T-205/10 had yet to deal with a battle of Hispanic trademarks beer between Cerveceria Modelo (Mexico) and Plataforma Continental (Spain). The judges rejected the appeal upholding the finding by OHIM of likelihood of confusion between the following marks for identical goods in Class 32:

The relevant public is the average EU consumer. As the Office pointed out, even if in the sector of alcoholic drinks, the consumer is used to trademarks with various figurative and denominative elements, he will not pay more attention to the various elements (in particular after more than one pint..).

On the overall impression of the trademarks, the Office rightly found that VICTORIA is the dominant element in the earlier mark and that the other words ‘cerveza’, ‘pilsener’, ‘Málaga’ or ‘1928’ are of secondary importance size-wise and also because of their descriptive character of the product, place of geographic origin and year of marketing. Thus, from a visual and aural point of view, the signs are similar in coinciding in their dominant element.

From a conceptual point of view, the consumer who speaks English or Romance languages (i.e.: the French, 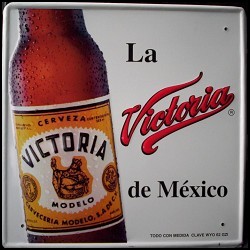 Italian, Portuguese, Romanian and Spanish) will probably understand ‘victoria’ as referring to ‘victory’; however for the rest of the EU consumers, it might be perceived as a woman’s name . The conceptual meaning of ‘the biggest victory of Mexico’ of independence over the Spanish Kingdom was not demonstrated. For most EU consumers, Mexico clearly indicates the place of origin because it corresponds or is similar to the country’s name (¡no chingues! As the locals would say) and will be understood as a qualifier of the victory or the woman’s name. Overall, the dominant element being clearly VICTORIA , the marks will be seen as conceptually similar.

Sharing on Social Media? Use the link below...
Perm-A-Link: https://www.marques.org/blogs/class46?XID=BHA2715