In Judgment T-586/10, the General Court confirmed the decision of the Second Board of Appeal which found there could be no likelihood of confusion between figurative Community trademark ‘ONLY GIVENCHY’ registered for Class 3 goods and earlier Danish and CTM rights 'ONLY' for goods in Classes 3, 9, 14, 18 and 25. 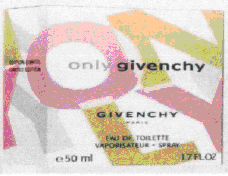 The Board of Appeal, like the Opposition Division, began its analysis by examining earlier Danish trade mark VR200103359 and concluded that the relevant territory was Denmark and that the relevant consumer was the average consumer, deemed to be reasonably well informed and reasonably observant and circumspect.

The Court also confirmed that the signs were visually similar only to a low degree, since the adverb ‘only’ served the purpose of drawing attention to the element ‘givenchy’ in the mark applied for, whereas in the earlier marks the adverb ‘only’ had a more general function. As regards the phonetic comparison, there is a medium degree of aural similarity between the signs due to the fact that the additional element ‘givenchy’ in the mark applied for will be pronounced. Conceptually, the element ‘only givenchy’ formed a logical and conceptual unit with a laudatory semantic value, distinct from the word ‘only’ considered in isolation, with the result that the signs were partially similar.

Accordingly, there is no likelihood of confusion between the signs at issue within the meaning of Article8(1)(b) of Regulation No207/2009 (CTMR). As is clear from paragraph 31 of the contested decision, that finding also applied as regards earlier Danish mark VR200002183 and Community trade mark No 638 833, since those marks were identical to earlier Danish trade mark VR 2001 03359, but the goods covered by those marks and those covered by the mark applied for were, at most, similar.

Lastly, as regards Article 8(5) of CTMR, the degree of similarity between the signs at issue was not sufficient for the public to establish a connection between them, since the element ‘only’ in the mark applied for would be perceived as inseparable from the element ‘givenchy’, whereas it had an independent distinctive role in the earlier marks. Accordingly, as the condition requiring the signs to be sufficiently similar to lead the relevant public to make a connection between them was not met and the plea based on Article 8(5) CTMR must be rejected.

Posted by: Laetitia Lagarde @ 17.40
Tags: General court, likelihood of confusion, only, only givenchy,

Sharing on Social Media? Use the link below...
Perm-A-Link: https://www.marques.org/blogs/class46?XID=BHA2667