The last post on the judgment of the Polish Supreme Court of 20 February 2011, case file IV CSK 393/10, has sparked some interest of our readers, so here is more detailed summary.

Hochland Reich Summer & Co. KG owns a three-dimensional trade mark IR-736770 in Poland, and Hochland AG is the owner of the right in registration of an industrial design Rp-5337. The 3D trade mark is not used in the registered form, but is marketed as a product package of ALMETTE cheese, with additional verbal and figurative elements. Both Hochland AG and Hochland Reich, Summer & Co. KG, together with Hochland Polska sued the Polish dairy cooperatives in Piątnica because it has used the packaging for cheese, on which a graphic of a wooden pail that was similar to Hochland's trade mark and design was placed.

The District Court dismissed the suit and refused to recognize the trade mark as a renowned one. However, the Court agreed with the opinion issued by the expert witness that a clean pail, without any identifiers, is strongly associated with the Almette brand. The District Court agreed with Piątnica that this trade mark was not used in trade in its registered form, and that Hochland didn't prove that the use of cup-like pail brings Piątnica unfair advantage or is detrimental to the distinctive character of Hochland's trade mark, which is a prerequisite to the protection of reputed/renown trade marks. The Appellate Court in Białystok in its judgment of 26 February 2010 upheld these findings except the costs and the issue of trade mark use. Hochland filed a cassation complaint. 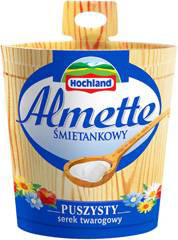 The Supreme Court in its judgdment of 10 February 2011 case IV CSK 393/10 found that the Appellate Court decided that the expert's opinion had no probative value because of the unrepresentative range of research on which it was based, and as a result, the Court found that Hochland failed to prove that its trade mark is a distinctive sign, with reputation. The Appellate Court spoke on the inadequacies of the expert opinion only in the justification of the judgment, and not during the proceedings, which precluded Hochland from filing any additional and "proper" evidence. The Supreme Court ruled that renowned trade marks enjoy special protection - wider than the other signs, i.e., even if there is less similarity between trade marks or the goods. In the case of reputed signs, the risk of confusion or the likelihood of confusion is not required. The association with the earlier renowned sign is a sufficient condition. The Court noted that the Polish Industrial Property Law does not provide any definition of reputable trade mark, but only points to the specific conditions of protection. The Supreme Court emphasized that the definitions provided in the legal commentaries, as well as in the case law of the Court of Justice of the EU and Polish courts, differ in this respect. The Court noted that a reputable trade mark is recognized by a significant part of relevant public. The Polish legal commentators argue that such a sign must be known at least by 25 percent of relevant public, and if the percentage exceeded 50 percent, the reputation is always proved. The Supreme Court also noted that the protection of a reputable trade mark does not require the owner to prove that the use of a similar trade mark has brought its user unfair advantage or was detrimental to the distinctive character or the reputation of the earlier mark. A mere possibility of obtaining unfair advantage by the infringer or the very possibility of harmful effects to the distinctive character or the repute of the earlier trade mark, is a sufficient condition. Therefore, these conditions have normative and hypothetical nature. The Supreme Court held that the Appellate Court erred in the examination of the opinion of another expert witness, who showed that the use of the image of a wooden pail on the packaging of cheese, in the assessment of 69% of consumers may affect their decision on the purchase of goods, and therefore it could potentially influence the purchase of the goods produced by the defendant in its packagings. This circumstance was important for assessing whether the use by the defendant of Hochland's trade mark could bring Piątnica unfair advantage at the expense of the owner of the trade mark, who first used the sign and incurred substantial costs for its promotions within a few years. 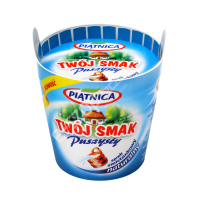 The Appeallate Court in Białystok in its judgment of 7 July 2011 case file I ACa 305/11 was bound by the decision issued by the Supreme Court. The Court pointed out that according to the opinion of Grzegorz Urbanek, who was appointed as an expert witness, the wooden pail is associated to the Almette brand in the perception of most respondents. Both the opinion and attached results showed that even a same wooden pail without and with identifiers has the same effect, i.e. the half of the respondents, because of the packaging, was willing to buy the Almette cheese, and not other cheese of the same type but in the same packagings. Therefore, the Appellate Court prohibited Piątnica to use in the course of trade of a figurative sign representing a wooden pail with a handle, on the packaging of its cheese products. Piatnica still uses the packaging for its cheese, which is similar to a wooden pail. The dairy cooperatives replaced the image placed on the packaging with the milk-churn with pouring milk. Posted by: Tomasz Rychlicki @ 16.32
Tags: famous trade marks, reputed trade mark, renown trade mark, Polish Act on Industrial Property Law, Polish courts, Polish Supreme Court, infringement of reputation,

Sharing on Social Media? Use the link below...
Perm-A-Link: https://www.marques.org/blogs/class46?XID=BHA2663