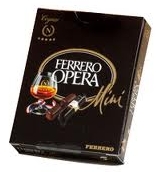 The Polish Patent Office refused to recognize the protection of the FERRERO OPERA IR-0891152 trade mark owned by SOREMARTEC S.A. The PPO decided that there are already registered similar or identical trade marks owned by Ferrero S.p.A.

SOREMARTEC argued that there is no real risk of misleading the public as to the origin of goods bearing signs in question, due to the fact that these trade marks are owned by closely related companies, and the goods are produced by all companies according to uniform quality standards. The Company presented documents confirming relationship between the companies, and submitted also a letter of consent.

The PPO agreed that there are regulations on letters of consent provided in the Polish Industrial Property Law. According to this provisions the owner of a lapsed trade mark may agree for a registration of a new trade mark, but the Polish legislator did not foresee similar rules relating to the signs remaining in force. However, as the PPO noted, this is not a legal loophole. This rule is clear and there are no doubts. There's an exception to that rule, but it is very limited and it should not be interpreted broadly. As the PPO noted this is a classic example of a positive-negative regulation that is used in the legislation. As a contrario interpretation, Article 133 of the IPL sets two standards: a positive - that permits registration of the trade mark after obtaining the consent of the owner of an earlier mark that has lapsed, and negative – it does not allow for consent letters for the other collisions (i.e. with signs of remaining in force, renown, reputed signs, etc.).

Article 133 The provision of Article 132(1)(iii) shall not apply where the protection has terminated under Article 169(1)(i) or the right holder of the earlier right has given his consent for the later trade mark being granted a right of protection.

The Supreme Administrative Court in its judgment of 20 December 2007 case file II GSK 279/07 supported this interpretation. The SAC ruled that the provision of Article 4(5) of the First Council Directive 89/104 has not been implemented into Polish law, and it was futile to rely on the infringement of this provision, because such a consent has not the legal effect under Polish law. See "Poland: consent letter is not enough". The examination system was adopted for the registration of trade marks in Poland. Letters of consent do not eliminate the risk of consumers' confusion as to the origin of goods. This fact must therefore be taken into consideration during the examination of applied trade marks. The sign has to distinguish one entrepreneur from another entrepreneurs. The capital group is the association of many entrepreneurs linked to each other in different ways. If the goods are actually marketed by such a group and do not cause the confusion of consumers, the institution of a joint right of protection. The obligatory regulations governing use of trade marks adopted by the undertakings who have jointly applied for the trade mark protection, ensures that the signs will not be misleading at the time of filing the trade mark application, but also during their existance on the market. However, one can not assume in advance that the signs coming from companies that are linked organizationally and financially do not mislead consumers. There always will be a risk of consumers' confusion. During the application proceedings, it is not possible for the PPO to examine the policy of big companies in order to identify the origin of each product offered. Therefore, if a number of separate legal entities want to use a similar trade mark, they must, in accordance with Polish law, to use the institution of a joint right of protection or simply trade mark licenses. There is no legal justification to treat the origin of signs from companies linked organizationally and financially as a guarantee of the absence of the risk of consumers confusions as to the origin of these goods.

The Voivodeship Administrative Court in its judgment of 17 May 2011 case file VI SA/Wa 262/11 overturned the decision of the Polish Patent Office and held it unenforceable. The VAC agreed with the PPO that in principle, the mere letter of consent that was issued by a company that was unrelated organizationally and/or legally with entitled to the trade mark application, is not a basis for registration of a mark identical or similar. However, this document was not the only document on which SOREMARTEC relied to demonstrate the lack of the risk of conumers' confusion. When examining the collected evidence material the PPO completely ignored the fact that the applicant has a number of trade marks with the word element "Ferrero" including signs from the earlier priority than the opposed trade marks. In addition, the VAC noted that SOREMARTEC owns trade marks containing the "Ferrero" element which were registered by the PPO on the basis of letters of consent. Posted by: Tomasz Rychlicki @ 19.25
Tags: letter of consent, Polish Act on Industrial Property Law, similarity of goods, similarity of signs, trade mark refusal, Voivodeship Administrative Court,

Sharing on Social Media? Use the link below...
Perm-A-Link: https://www.marques.org/blogs/class46?XID=BHA2568