Aquatherm GmbH registered a single green color determined by RAL 150 60 40 as a trade mark IR-863506 for goods in Class 19 such as rigid pipes of polypropylene for the supply of drinking water and heating and air conditioning systems in houses, office buildings and industrial buildings. The Company sought the recognition of the protection of its trade mark on the territory of the Republic of Poland based on the provisions of the Madrid Agreement Concerning the International Registration of Marks.

On 11 July 2006, the Polish Patent Office transmitted to the International Bureau in Geneva a notification of the grounds which prevent the protection of an international trademark to be recognised on the territory of the Republic of Poland. The PPO decided that according to Article 120 of the Polish Industrial Property Law this trade mark cannot distinguish the goods, because it is a single color and it is devoid of sufficient distinctive character.

On 20 April 2007, the Patent Office sent a letter to the International Bureau with information concerning the correction of a clerical error in the notification dated 11 July 2006, informing that the provisional refusal to recognize the protection should include Article 129(1)(ii) and Article 129(2)(i) of the IPL and not Article 120 of the IPL. At the same time the PPO did not consider the request of the Aquatherm GmbH to initiate an administrative hearing on the correction this error. The PPO pointed out that the correction did not changed the legal basis of the notification. The difference in the numbering of Articles 120 and 129 was a result of unfortunate in this case close arrangement of numbers 9 and 0 on the computer keyboard.

The Polish Patent Office in its decision of 9 May 2008 case DT-IR-863 506 refused to recognize the protection. Aquatherm GmbH filed a request for re-examination of the matter, but it was dismissed by the PPO in its decision of 10 June 2009 case PT-430/08 IR-863 506. The PPO did not agree with the Aquatherm GmbH that the registration on its behalf of the earlier trade marks such as IR-832895 or IR-837655 justifies the registration of the applied sign, because each case is decided according to individual circumstances. The PPO held that it has not changed as a result of correcting errors, the legal basis of the refusal.

Aquatherm GmbH filed a complaint against these decisions. The Company argued that the PPO infringed on Article 5(2) of the Madrid Agreement because it took its decision after the expiration of one year term that is calculated from the date of the international registration of the mark. The provisions that were used as the basis for refusal, were first indicated in the letter of 20 April 2007. Aquatherm GmbH argued also that the PPO mistakenly determined that the goods included in the list of goods and services are everyday consumer goods targeted for mass audiences, and that the green color is commonly used for the determination of water supply pipes, and aqueous solutions. According to the Company, the PPO has not made an exhaustive evaluation of the evidence, in particular, it completely ignored the key evidence submitted by the company in a statement of the Polish Corporation of Sanitary, Heating, Gas and Air-Conditioning Technology which included information on whether a given color may indicate the manufacturer on the market of installations polypropylene systems, and whether the the green color used as designation of pipes or installations allows the buyers to identify these products with Aquatherm GmbH.

The Voivodeship Administrative Court in its judgment of 3 December 2009 case file VI SA/Wa 1452/09 dismissed the complaint. The VAC held that the provisional refusal cannot be considered ineffective. According to the Court, the PPO indicated the grounds for refusal which was in accordance with the Rule 17 of the Common Regulations under the Madrid Agreement Concerning the International Registration of Marks and the Protocol Relating to that Agreement. The Court noted that in the case of color per se its concrete distinctive ability must be interpreted in the light of public interest, which is based on the ruled of the limited reduction of the availability of colors for other entrepreneurs who offer goods or services of the same kind as the goods or services covered by the registration application. The basic function of the trade mark is to guarantee to the final consumer or user, the identity of the origin of the goods or designated services bearing the trade mark, by letting him to distinguish the goods or the service of goods or services of different origin. The distinctive character of the sign is based on such features, which in the minds of consumers clearly indicate that a particular product bearing a given trade mark comes from the specific company. The VAC noted that in relation to the color per se, it is assumed that the existence of primary distinctive characteristic (without any prior use) is possible only in exceptional circumstances, especially when the number of goods or services for which the mark is applied for is very limited and when the relevant market is very specific. The Court noted that the green color in relation to the applied goods is not unusual. The VAC agreed with the PPO that in the case of green color used for the pipes used for water flow there is a risk that consumers will associate it with nature, therefore it should not be monopolized by one company in particular that this shade of green RAL 150 60 40 is also not original.

Moreover, the VAC found that the Patent Office has rightly used the example of PN-70/N-01270 standards - Guidelines for marking of pipelines. The standard recommends that the painting for the identification of pipelines made ​​of carbon steel or other materials susceptible to corrosion should be coordinated with anticorrosive painting, in which the topcoat should also fulfill the function of identification. It is customary to use green for water and chemical solutions that pose no chemical and thermal threat. The Court noted that the statement the Polish Corporation of Sanitary, Heating, Gas and Air-Conditioning Technology could be helpful to support Aquaterm position, but also found that such a document can not be regarded as expert evidence under the provisions of Polish Administrative Proceedings Code or substitute evidence from opinion polls. 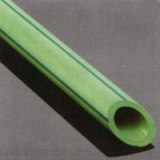 The Supreme Administrative Court in its judgment of 15 April 2011 case file II GSK 466/10 dismissed the cassation. The SAC agreed with the findings included in the judgment of the VAC and ruled that the provisional refusal to recognize the protection is, by its very nature, a some kind of the general statement issued by an authorized body of the sate that is the party to the Madrid Agreement, and it includes the grounds which prevent the protection of an international trademark to be recognized on the territory of the Republic of Poland. The reasons given in the notification of provisional refusal set the boundaries within which the Polish Patent Office then investigates the case and its matter. However, as it was mentioned, the notification is of a general (signaling) nature and it is clarified in a subsequent administrative proceedings. In the event of a dispute, the position included in the notification is subject to detailed examination by the administrative courts, reflecting inter alia the context of a trade mark application, the nature of the applied sign, etc. As a consequence, the reasons of a provisional refusal should be explained in general terms and taking into account all the circumstances specified in the notification by the authority. Posted by: Tomasz Rychlicki @ 11.37
Tags: Madrid Agreement, Art. 6 quinquies Paris Concention, Directive 89/104/EEC, distinctive character, Paris Convention, Polish Act on Industrial Property Law, Polish Supreme Administrative Court, single colour, trade mark refusal,

Sharing on Social Media? Use the link below...
Perm-A-Link: https://www.marques.org/blogs/class46?XID=BHA2444