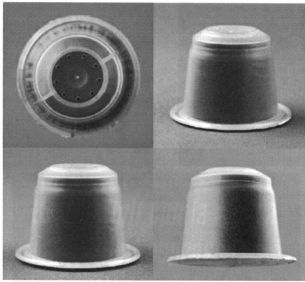 As noted on Class 46, the Commercial Court of St. Gall, Switzerland, issued an ex parte preliminary injunction against the sale of coffee capsules compatible with Nestlé's Nespresso system by the Swiss retailer Denner in early January.


After hearing both parties,  the Commercial Court of St. Gall has now lifted the injunction. In essence, it held that Denner has the right to distribute capsules compatible with Nestlé Nespresso system (p. 11 of the decision; the capsules are shown above). In order to be compatible with the Nespresso machines, the capsules need to have a certain shape, namely a conical shape essentially conforming to the chamber of the Nespresso machines. Nestlé had failed to show that it was technically possible to produce compatible capsules without incurring substantial disadvantages (according to the court, it needed to show that alternative solutions were as practical, solid and cheap to make as the Nespresso capsule). While Nestlé argued that it was possible to manufacture compatible capsules that had convex sidewalls (like a waistline), the court notes that such shapes could contain 20% less coffee and were therefore inferior to the original shape (p. 14). Therefore, the conical shape of the capsules was due to technical considerations.

Acquired distinctiveness does not allow to overcome the absolute ground of refusal for marks which consist exclusively of the shape of goods which is necessary to obtain a technical result. Therefore, it made no difference that the Nespresso capsules were very well-known in Switzerland. The mark was presumably invalid and could not form the basis of a preliminary injunction. The court did, however, affirm its ex parte injunction insofar as it prohibits Denner from using a literal translation of Nestlé's slogan "WHAT ELSE" in promotion of the capsules.

News sources report that Nestlé also failed to obtain a preliminary injunction against Denner based on two patents; this suit was filed before the Commercial Court of Zurich. The full decision is not online yet. Pivotal seems to be that the Denner capsules are not airtight; freshness is guaranteed by the wrapping of the capsules in a sealed bag. The court was apparently not convinced that this was equivalent infringement; because of the lack of details in the news articles, it is difficult to judge what exactly happened.

Sharing on Social Media? Use the link below...
Perm-A-Link: https://www.marques.org/blogs/class46?XID=BHA2275