On 8 October 2008, Chivas Holdings Limited filed a CTM application for the word mark

The Glencairn Scotch whisky Company Limited opposed such application on the basis of its earlier UK trademarks also in class 33: 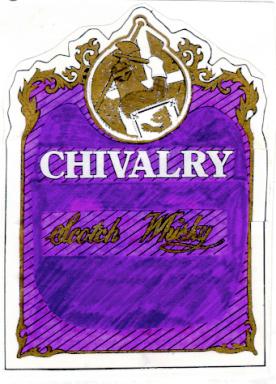 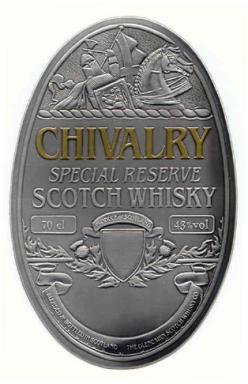 and of the non registered trademark CHIVALRY.

According to the Opposition Division, the goods were identical or similar and the marks had a low degree of visual and aural similarity, while conceptually, they were similar to the extent that they shared the concept of “chivalry’.

CHIVALRY had been considered the distinctive and visually dominant element of the earlier trademark. The contested trademark had been predicted to be perceived as a slogan advertising the opponent’s trademarks.

The applicant appealed the decision, on the ground that the signs are not visually similar and that there is no basis or precedent to sustain that the contested mark is likely to be regarded as a slogan.

The Board of Appeal found that the Appeal was not founded.

i) a visual similarity between a word trademark and a figurative trademark is possible, since both types of marks have a graphic form that is capable of creating a visual impression.

ii) it is a rule that a complex trademark can be considered similar to another sign if the latter reproduces the dominant element which forms the overall impression created by the complex mark.

iii) the relevant public does not generally consider a descriptive elements forming part of a complex trademark as distinctive and dominant, then forming the overall impression.

In the case at issue, the dominant element of the earlier trademark is the word CHIVALRY and, even if located at the end of the trademark, CHILVARLY is also the element which will be remembered within the global image of the opposed trademark.

In fact, the Board stated, the settle case –law that the consumer usually pays more attention to the initial part of the mark can not hold in all cases (cit. Case |TT- 72/08 Travel Service s.s. v OHIM - “Smart Wings”).

The same reasoning applies to aural similarity, and undoubtedly the concept of “chivalry” (quality of an ideal knight, courtesy behavior) is common to both signs.

Therefore, is likely that the opposed mark would be conceived as a slogan based in the concept of chivalry, which is dominant element of the earlier trademark.

“Precisely because the contested marks is a slogan built around the only concept which makes the earlier trademark, (the idea of chivalry), it would be perceived as a slogan advertising this mark. Even if “Chivas” would be recognized as being a trademark in the contested sign (in respect to alcoholic beverages, and in particular in respect of whiskies and malts, the relevant consumer tends to be particularly brand conscious and brand loyal), consumers acquainted with the earlier trademark, would think that there is an economic link between the undertakings producing the two signs”.

Sharing on Social Media? Use the link below...
Perm-A-Link: https://www.marques.org/blogs/class46?XID=BHA2269