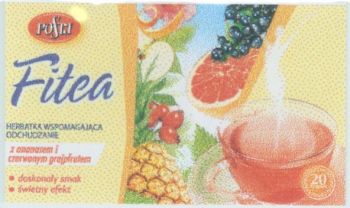 POSTI S.A. applied for the word-figurative trade mark "POSTI Fitea HERBATKA WSPOMAGAJĄCA ODCHUDZANIE Z ANANASEM I CZERWONYM GREJPFRUTEM" Z-334116 for foods in Classes 05 and 30. The Polish Patent Office refused to grant the right of protection. The PPO ruled that there exist similarity between applied sign and the word-figurative trade mark "fittea" R-178995 owned by "BIOFLUID" Spółka Jawna from Górki Małe. POSTI filed a complaint against this decision.

The Voivodeship Administrative Court in its judgment of 5 November 2010 case file VI SA/Wa 1126/10 annulled questioned decisions. The Court ruled that the internal characteristics of the trade mark, including descriptive elements (or lack of such) of the goods and services for which it is registered, the market share of trade mark in question, the intensity and temporal and geographical scope of the use, investments in promotion and advertising, the percentage of relevant recipients, who because of the trade mark are able to identify products or services as originating from a particular company, must be taken into account when establishing the existence (or nonexistence) of recognition of the trade mark with an earlier priority. The Court ruled that the PPO should determine the mentioned above conditions and the outcome will help to assess the risk of confusion as to the origin of the goods which may occur if the protection was granted for the sign in question. The judgment is not yet final. Posted by: Tomasz Rychlicki @ 14.58
Tags: Voivodeship Administrative Court, descriptive character, distinctive character, similarity of goods, similarity of signs, trade mark refusal, trademark law,

Sharing on Social Media? Use the link below...
Perm-A-Link: https://www.marques.org/blogs/class46?XID=BHA2207

Reader Comments: 2
Post a Comment
Submitted By: Tove Graulund
13 January 2011 @ 08.34
Again another decision that I don't understand. I would think that the Office was correct in looking at the words which are the ones that qualify as trademarks, here FITTEA and FITEA. The fact that the younger application includes a whole bunch of pictures and other irrelevant elements should not render the older right useless. Or am I getting something wrong here?
Submitted By: Tomasz Rychlicki
13 January 2011 @ 15.28
The Court held that the PPO has focused only on the comparison of the verbal elements in both trade marks, and on that basis it found similarity of both signs. Again, according to the VAC, the PPO did not take into account other elements such as graphics, especially in the trade mark with a later priority, and as the Court repeated, the fundamental principle is the overall assessment of opposed trade marks.