Under judgment No. 244/2010, the Greek Council of State resolved a long-standing dispute regarding the validity of the trade mark “Leonard” filed and registered for clothes in class 25, by the French entity ‘Leonard Fashion’, and attacked by the Greek ‘Batis SA’, on the basis of bad faith filing. 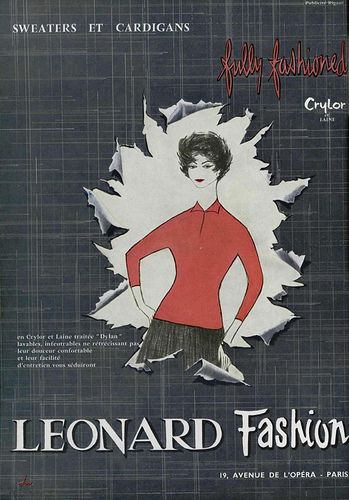 The story begins in 1979, when BATIS SA (founded by Mr Leon  Batis) filed and registered a word mark consisting of the dominant stylized word “Leonard’s” accompanied in small characters by the phrase “Styled in Paris”, in connection with goods in class 25. The mark was initially rejected and while the case was still on appeal, in 1981, Leonard Fashion filed and registered for identical products the word mark “Leonard” (an old advertisement of Leonard Fashion here left). In 1989 BATIS SA succeeded in their appeal and the “Leonard’s styled in Paris” mark was finally accepted. Leonard Fashion filed a third party intervention action (they could do that as they were not party to the previous registration litigation) seeking that BATIS SA’s mark is rejected, but their action was dismissed in 1992. Unfortunately for BATIS, despite their successful defense, they lost their mark because they failed to renew it! In 1995, they filed the mark “Leonard’s styled in Paris” again, only to see it rejected, on the basis of likelihood of confusion with Leonard Fashion’s earlier “Leonard” registration. BATIS filed a recourse action against this decision but failed again. In the meantime, they also moved to the offence. A first cancellation action against the “Leonard” mark on the grounds of non use failed, but was followed by another one on the ground of filing in bad faith. This dispute reached the Council of State. The main argument was that the French Leonard’s Fashion entity, being aware of BATIS’ products under the mark “Leonard’s” from as early as 1979, filed their trade mark application in 1981 to unlawfully benefit from the reputation of the said mark (subjective bad faith filing). Leonard Fashion replied that they have been using “Leonard” for their goods internationally as from 1957 and marketing their goods in Greece as from 1995 [So, why was the action on the ground of non use unsuccessful?]. The Greek Trade Marks Administrative Committee did not buy their arguments and held that the filing of the trade mark was in violation of objective good faith, i.e that, regardless of the intentions of Leonard Fashion, the mark’s filing and registration created an objectively unfair result in the course of trade. The Committee’s decision was not in line with the established (though heavily criticized by legal theory in Greece) case law of the Greek courts on the subject. Indeed, under the jurisprudence, bad faith filing in cancellation proceedings is taken to mean that the challenged mark will only be cancelled if the applicant sought to create unfair results in the course of trade. In other words, the crucial element is the intention of the applicant (subjective criterion), and the fact that the registration of the mark indeed creates an unfair result (objective criterion) does not suffice for the cancellation of the mark. Leonardo Fashion filed a recourse action and succeeded before the First Instance Administrative Court and, later, before the Court of Appeal. The latter held that BATIS proved the marketing of their product from the year 1982 onwards (not 1979 as they argued), which was a year later than Leonardo Fashion’s filing of their mark and ruled that Leonardo Fashion had not sought to take unfair advantage from BATIS’ mark, which appeared later. Essentially, the Court of Appeal decided the case on the basis of the subjective bad faith doctrine and, easily apparently, with the help of the insufficient (according to the ruling) documentary evidence to prove BATIS’ prior use of the mark.

The Council of State, on final appeal by BATIS, upheld the ruling. It found no error in the appellate court’s reasoning, but addressed a crucial argument of BATIS in a shaky manner. BATIS argued that the appellate court should have taken into account and in fact was bound by the res judicata of the earlier (1989 and 1992) trademark court decisions, which allowed BATIS’ first  “Leonard’s styled in Paris” trademark and rejected Leonard Fashion’s third party intervention against said trademark.  BATIS sought to utilize these decisions to prove Leonardo Fashion’s bad faith. The Council of State went around the argument: it held that since these judgments revolved around a trademark which had lapsed, they had no evidentiary influence in the current dispute [despite that, one would argue that court decisions being public documents cannot be disregarded by the court – the Council of State had an answer to that as well; here it is]. Moreover, for the same reason, they do not constitute procedural documents of the trial and their content cannot be reviewed, unless and to the extent that it mentioned or reproduced in the appellate court decision. And since the appellate court did not refer to these decisions, then the Council of State cannot review them. Thus, BATIS’ final appeal was rejected and Leonardo Fashion’s trademark registration remained unspoiled. BATIS, however, does own the <leonards.gr> domain name (below - image taken from the site).

Sharing on Social Media? Use the link below...
Perm-A-Link: https://www.marques.org/blogs/class46?XID=BHA1859