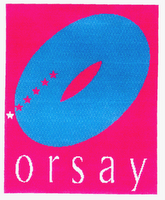 The Court of First Instance in Cases T-39/04 and T-378/04 Orsay GmbH v OHIM ruled on 14 February 2008 that the two pink CTM applications depicted here are confusingly similar to the prior Spanish registration for D'ORSAY (below, right) for goods covered in Class 25.

Orsay GmbH applied to register the figurative marks O ORSAY and ORSAY as Community trade marks in Classes 23, 24 and 25. Jose Jimenez Arellano SA filed oppositions against these two marks, based on an alleged likelihood of confusion with (among others) its prior Spanish registration for D'ORSAY covering Classes 03, 18 and 25. The Opposition Division upheld the oppositions insofar as Class 25 was concerned, arguing that the Class 25 goods were identical and the respective signs similar. In respect of Classes 03 and 18 and Classes 23 and 24, the Opposition Division refused the oppositions on the basis that the goods were not similar.

Orsay GmbH appealed to the Board of Appeal, which affirmed the Opposition Division's decision. The BoA argued that there was a likelihood of confusion as the goods were identical and the marks significantly similar from a phonetic point of view, as well as being slightly similar visually. The BoA was concerned that consumers might see the applications as modern versions of the prior mark.

The CFI affirmed these decisions. It was undisputed that the relevant goods covered by Class 25 were identical, and the CFI agreed that the marks were similar. The element "d'orsay" comprised in the earlier mark was seen as the mark's dominant component as it could be distinguished from the visual element of the mark and the only phonetic part of the mark. The final 5 letters of the mark ("orsay") were identical to both applications.

The visual element in the application was thought to be read as the letter "O" -- despite the addition of the stars -- because was is situated on the same line as the remaining letters "rsay" and made the word "orsay" pronounceable.

Sharing on Social Media? Use the link below...
Perm-A-Link: https://www.marques.org/blogs/class46?XID=BHA137