Fresh from its oven, the CFI delivered its judgment today in Case T‑16/08, Perfetti Van Melle SpA v OHIM and intervener Cloetta Fazer AB. In 2000, Perfetti succeeded in registering the word indication CENTER SHOCK, as a CTM for, basically, chocolate and confectionary products. In 2004, Cloetta initiated declaration of invalidity proceedings, on the basis of, inter alia, its earlier Swedish and Benelux trade mark registrations of the word mark CENTER, in connection with identical goods. By decision of 24 November 2005, the OHIM Cancellation Division granted the application for a declaration that the CENTER SHOCK trade mark was invalid with regard to all the goods for which it had been registered. Perfetti appealed, but by decision of 7 November 2007, the Fourth Board of Appeal of OHIM dismissed the appeal. The Board of Appeal held in substance that, having regard, first, to the identical nature of the goods designated by the CENTER and CENTER SHOCK trade marks and, secondly, to the visual, phonetic and conceptual similarities of those marks, a likelihood of confusion in Sweden and the Benelux countries had been established. The CFI agreed. According to its judgment:

41 In the present case, what is at issue are the word signs CENTER SHOCK and CENTER. The Board of Appeal concluded in paragraph 41 of the contested decision that the common element ‘center’ gave the signs an overall phonetic, visual and conceptual similarity which is such that the relevant public, when faced with those trade marks in respect of identical goods, might believe that the trade marks have a common commercial origin.

42 That conclusion must be approved.

44 Conceptually, the trade marks at issue, which refer, on account of their common component ‘center’, to the same idea, must be regarded as similar. The fact that the CENTER SHOCK trade mark is also composed of the word ‘SHOCK’ does not affect that finding. As the Board of Appeal pointed out in paragraph 38 of the contested decision, where a composite mark is composed by juxtaposing one component and another trade mark, that latter mark, even if it is not the dominant component in the composite mark, may still have an independent distinctive role in the composite mark. In such a case, the composite mark and that other mark may be considered to be similar (see, to that effect and by analogy, Case C-120/04 Medion [2005] ECR I-8551, paragraphs 30 and 37).

45 None of the arguments raised by the applicant casts doubt on that finding.

46 As regards, first, the applicant’s statement that, in the CENTER SHOCK trade mark, the word ‘center’, which is used descriptively and which therefore has an extremely weak descriptive character, is only perceived as a qualifier of ‘shock’, it is sufficient to observe that the word ‘center’, which has its own distinctive character, cannot be used as an adjective, but only as a verb or a noun. In any event, the applicant has failed to prove in what way the component ‘center’ is descriptive or, at the very least, suggestive of a quality of all the goods in respect of which the marks at issue were registered.

47 As regards, secondly, the arguments based on the applicant’s ownership of other marks containing the component ‘center’ and the existence of such marks in the food sector, they cannot be considered relevant. Even were such arguments to be declared admissible in that they are based on documents actually produced before OHIM, it must be stated that the Community and international trade mark registrations on which the applicant is relying, apart from the fact that some of them have been contested or withdrawn, are not capable of proving whether and to what extent signs containing the word ‘center’ are actually commonly used in the food sector.

48 As regards, thirdly, the arguments developed at the hearing that the contested decision diverges from the assessment of the similarity of the trade marks adopted in the judgment of 10 December 2008 in Case T‑228/06 Giorgio Beverly Hills v OHIM – WHG (GIORGIO BEVERLY HILLS), not published in the ECR, paragraph 28, it must be stated that the components at issue in that case are different from those at issue in the present case. First, unlike the words ‘beverly hills’, which refer to a particular geographical place with which the target public is familiar, the word ‘shock’ in the CENTER SHOCK trade mark does not have a strong semantic value which, combined with that of the word ‘center’, produces a whole that is conceptually different from the CENTER mark. Secondly, contrary to what was concluded concerning the use of Italian forenames and surnames, such as Giorgio, in the clothing sector, in the present case the consumer may infer from the use of the word ‘center’, which is not frequently used in the sector under consideration, that there is an economic link between all the proprietors of the trade marks including that word.

There is some food (chocolate or confectionary) for thought here. If we are talking about confectionary or food, SHOCK appears significantly more distinctive than CENTER. Are we practically adopting the rule that, where goods are identical or similar, the incorporation of an element of the earlier mark in the compound latter one equals likelihood of confusion? Below is a chocolate cake I ran into while googling for picrures under "center chocolate". Enjoy virtually! 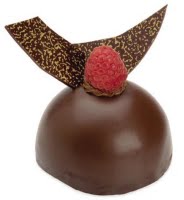 Sharing on Social Media? Use the link below...
Perm-A-Link: https://www.marques.org/blogs/class46?XID=BHA1251