In a case concerning trade mark and copyright law, the Turkish Court of Appeal has ruled that the use of a figure intensively cannot prevent the use of similar figures, as long as they are not identical. 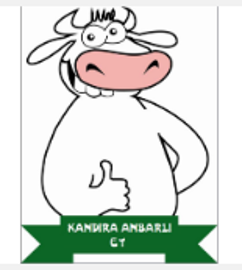 A recent decision of the Court of Appeal concerned an application to register a trade mark (shown right) in classes 29 and 43. The word elements in this application can be considered of low distinctiveness: ET means “meat” in Turkish, and so is descriptive for some of the goods within the scope of the application, while KANDIRA ANBARLI is the name of the place where the applicant (the defendant in this case) is based. 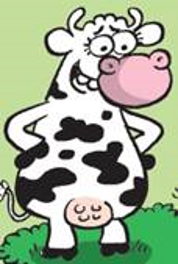 The plaintiff in the case is the owner of the SÜTAŞ mark, well known for dairy products in Turkey. The plaintiff has used different cow figures for its various dairy products for many years and runs an advertising campaign by releasing comics starring the cow (see below left).

It is a fact that the cow figure used by the plaintiff and the relevant comics are highly known in Turkey, as they were drawn by famous caricaturists in Turkey and have been published in national newspapers since 1998 (some of the comics can be seen here).

The Turkish Patent and Trade Mark Office rejected both the plaintiff’s opposition and its appeal. The Office registered the defendant’s trade mark, based on its final decision at the administrative stage. The plaintiff then challenged the Office’s final decision before the Ankara IP Court.

The Turkish Court of Appeal dismissed the decisions of the lower courts, reasoning that the simple fact that the plaintiff has been intensively using a cow figure on its dairy products and promotional materials together with its well-known trade mark would not prevent third parties using and registering a stylized cow figure as a trade mark for their own products.

The decision shows that the Court of Appeal seeks a high level of similarity, close to identity, between the figurative element in the applied-for trade mark and the alleged copyrighted figure in comparison, in order to decide in favour of the copyright holder. In other words, the Court of Appeal did not find similarity of the figures sufficient to protect the copyrighted figure for the reason that it qualifies as inspiration, which is legal under the copyright law.

Following the dismissal, the case was sent back to the first instance IP Court, re-recorded and re-tried. As a result, the IP Court decided to comply with the Court of Appeal’s ruling and dismissed the plaintiff’s case.

It should be noted from this decision that if a logo/device is used as a trade mark, protection based on copyright is not sufficient and one should also register it as a trade mark, in order to have broader protection and succeed in preventing similar devices being registered.

Sharing on Social Media? Use the link below...
Perm-A-Link: https://www.marques.org/blogs/class46?XID=BHA4830