The EUIPO and OECD have published a new report, ‘Trends in Trade in Counterfeit and Pirated Goods’. It updates analysis published in 2016.

The latest report estimates the value of the international trade in counterfeit and pirated goods to be up to €460 billion. This compares with an estimate of €338 billion in the 2016 report. 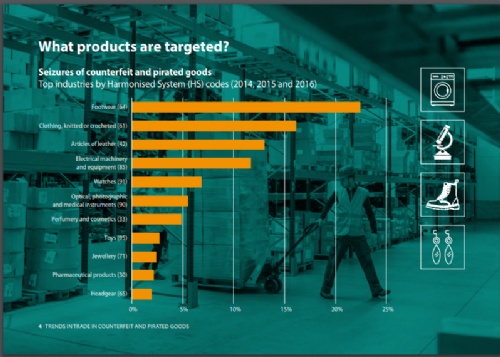 In the EU, 6.8% of all imports from third countries are now estimated to be counterfeit and pirated goods, up from 5% in the 2016 report.

The full report, executive summary and infographics are available on EUIPO’s website in various languages. The main findings include:

The report uses data from nearly half a million customs seizures from international enforcement agencies including the World Customs Organization, the European Commission’s Directorate-General for Taxation and Customs Union and the United States Department of Homeland Security. The datasets are composed of information collected and processed by customs officers.