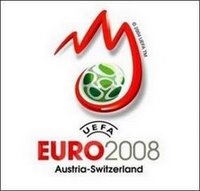 Arif Durrani, posting on Madcomments, notes that the leading brand sponsors of the Euro 2008 football tournament have so-far failed to score with football fans across the continent, according to two just-published independent surveys. These show that almost half Europe's football fans have no idea who is sponsoring this year’s Euro 2008 Championship. Depressingly for sponsors, these surveys include England where the national team's failure to qualify for the event has resulted in a low level of interest and even less attention to the identity of the sponsors.
According to Survey Sampling International, just 41 per cent of the nearly 2,000 self-proclaimed football fans from France, Germany, Spain and the UK could not name a single one of the tournament’s main official partners: Adidas, Canon, Carlsberg, Castrol, Coca-Cola, Continental, Kia, JVC, MasterCard and McDonald’s. An Ipsos Mori poll then reported that less than five per cent of 600 respondents associated Coca-Cola with the event, down from 14.5 per cent for Euro 2004. Similar falls in recognition were found in Carlsberg, moving from 5.5 per cent in 2004 to just 1.5 per cent in 2008. Carlsberg reckons that England's absence from the final stages of the event will cost it £15 million in lost lager sales. Several non-sponsoring brands, including Nike, Heineken and O2, were however thought to have ties to the event.

The bottom line is that sports sponsorship may be one way of building brand recognition, but (i) it is highly expensive and (ii) may not therefore be cost-effective when compared with other strategies for enhancing brand recognition and boosting sales.

Sharing on Social Media? Use the link below...
Perm-A-Link: https://www.marques.org/blogs/class46?XID=BHA461